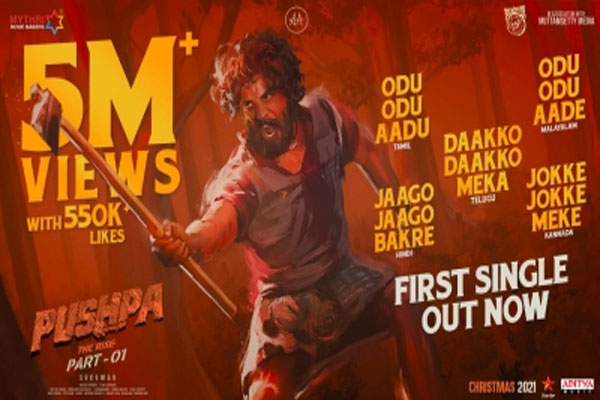 Hyderabad: Actor Allu Arjun’s much awaited multi-lingual ‘Pushpa’ started trending on social media after the makers released their first track ‘Jaago Jaago Bakre’ on Friday. Within four hours of release, it has already received over five million views on YouTube.

The lyrics have been penned by a set of talented lyricists in their respective industries, Hindi – Raqueeb Alam, Telugu – Chandrabose, Tamil – Viveka, Kannada – Varadaraj Chikkaballapura, and Malayalam – Siju Thooror.

Producers Naveen Yerneni and Y. Ravi Shankar of Mythri Movie Makers jointly said: “It makes us very happy to offer ‘Jaago Jaago Bakre’ to the listeners. The music of ‘Pushpa’ is an extension of its storyline and we’re glad to release one of the most energetic songs from it. The song is a musical introduction of Pushpa Raj, the role essayed by Allu Arjun. We hope to see love from the listeners in diverse languages.”

‘Pushpa’, which also stars Rashmika Mandanna, revolves around the red sanders heist in the hills of Andhra Pradesh. The film will be releasing in two parts.

China forced probe into origin of Covid-19 to drop lab-leak theory: WHO