Jagamohana repair to begin in a week: Odisha Chief Secy 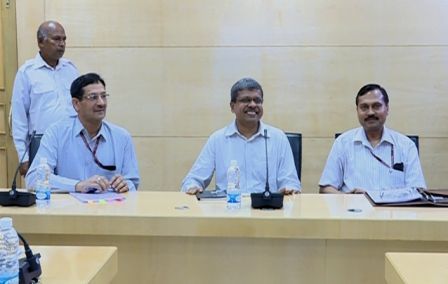 The Jagamohana repair would begin in a week based on the recommendations of experts from IIT-Madras, Odisha Chief Secretary Aditya Prasad Padhi today informed media after a meeting with a Central team who had visited the Jagannath temple in Puri to inspect the structural damage to the Jagamohana.

The Central team comprising of Union Tourism and Culture Secretary Narendra Sinha, Archaeological Survey of India (ASI) DG Rakesh Tiwari and other officials arrived in the state capital after winding up their inspection at the 12th century shrine earlier in the day and held a high-level meeting at the state secretariat with the Chief Secretary.

During the hour-long inspection, the Central team members held discussions with the technical core committee members who apprised them of the ground reality.

“We had a long inspection of the affected areas. It is not possible to explain it in a nutshell. We would do whatever is possible on our part. The cracks remained for 100 years and it came to the fore after deplastering. Nothing happened in these years which indicate that somewhere some sort of balance is there. Premier institutes like IIT-Madras, IIT-Bhubaneswar and NIT-Rourkela would be roped in and we would seek the help of overseas experts, if needed,” Union Tourism and Culture Secretary Narendra Kumar Sinha said.

Specify date for opening of Jagamohana: Odisha HC to SJTA

The participants held discussions on the restoration and repair of Jagamohana, the hall facing the sanctum sanctorum of Lord Jagannath temple. Following the meeting, the Central team members visited the temple for inspection.

“As deplastering has been done and the cracks are visible, the expert team saw the actual situation in detail. They also saw the pockets. The core committee suggestions were also explained to them,” Suresh Chandra Mohapatra, SJTA Chief Administrator said.

The first citizen of Lord Jagannath Gajapati Maharaj Dibyasingh Deb said that the Central team members have assured that they would undertake the repair work at the earliest.

“The ASI should begin a new chapter in the repair of Jagamohana in which best technical experts and senior officials should be engaged,” Gajapati Maharaj Dibyasingh Deb said.

In view of the repair work, the temple authorities had restricted the entry of visitors through the Jagamohana and the rituals of the Lords were also hampered.

“As the Debasnana purnima is on June 20, we would like the repair works to be completed by then so that the rituals can be performed smoothly,”a member of the Chhattisa Nijog, Janardan Pattasahani Mohapatra said.

Jagamohana repair to be completed by June 2