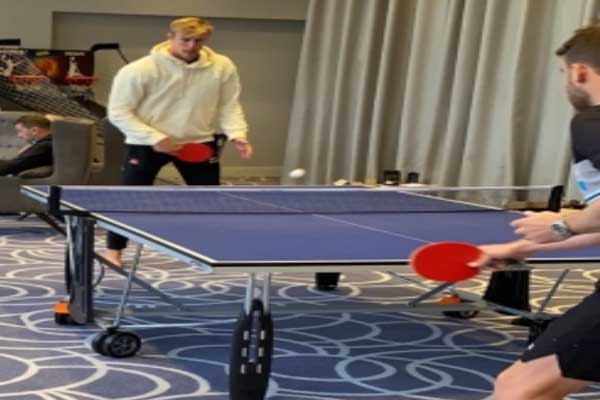 Southampton:  New Zealand pace bowler Kyle Jamieson, who has been at the receiving end of hateful comments from Indian fans after his five-wicket haul that included the wicket of India skipper Virat Kohli on Sunday, chilled out in the players’ area with a game of table tennis as the rain-delayed start of play on the fourth day.

“Wet weather has returned to the Hampshire Bowl so it’s table tennis for now..,” tweeted New Zealand Cricket on Monday along with a picture of the tall Kiwi pacer who wrecked the Indian batting.

Besides trapping Kohli’s leg before the wicket to trigger Indian collapse, Jamieson captured the wickets of Rohit Sharma, Rishabh Pant, Ishant Sharma — all caught in slips — and Jasprit Bumrah to complete his fifth five-wicket haul, and his second against India.

Jamieson has picked 14 wickets across five Test innings against India and clearly, the Indian fans weren’t happy with his latest haul.

Some of the Indian fans hurled unpalatable abuses at Jamieson on Twitter, questioning his place — by implying he is ungrateful — at the Indian Premier League (IPL) franchise Royal Challengers Bangalore (RCB) which is led by Kohli.

Jamieson, who was bought by the RCB for Rs 15 crore, has had a stellar start to his Test career. He has picked 44 Test wickets already, and he is only into his eighth Test.

“We didn’t start really well. We thought we fought back towards the latter part of the [second] day. [On Sunday morning] we talked about discipline and what we wanted to achieve. I guess it was good to be able to that,” said Jamieson after the third day’s play.

“It is not my natural length (with the one he got Kohli out leg before)… I felt that whilst I felt good [on Saturday], probably my body was tentative and brought my lengths back. While on Sunday I found a lot more freer and was able to bring that length more fuller, tried to wobble the ball a little bit. It paid off today,” he said.

Jamieson said that the bowling unit would accept any sizeable lead with glee.