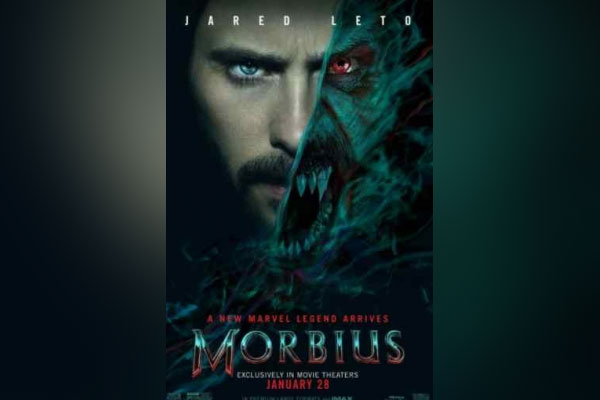 Los Angeles: The makers of the Spider Man spinoff ‘Morbius’ starring Jared Leto have pushed the release of the upcoming film by three months.

Sony Pictures will move the release of the film by three months, the studio said on Monday.

The film, part of Sony’s Spider-Man cinematic universe (not to be confused with Disney’s Marvel Cinematic Universe), will debut on April 1 instead of January 28, reports variety.com.

It’s not the first time that ‘Morbius’ has had to postpone its red carpet premiere. The film was supposed to debut on July 10, 2020, but got pushed due to Covid-19.

In its new release date, ‘Morbius’ will face off against ‘Easter Sunday’, a comedy with Jimmy O. Yang and Tiffany Haddish, as well as the Chris Pine thriller ‘The Contractor’.

Sony just scored massive box office successes with both ‘Spider-Man: No Way Home’ and ‘Venom: Let There Be Carnage’, so it makes sense that it would try to give ‘Morbius’ a longer runway at a time when the public health situation is complicating things.

The studio is also planning another standalone spinoff based on Spider Man villain Kraven the Hunter, so the stakes are high.

Sony licenses the Spider-Man character and the rights to his various antagonists and allies from Marvel in a deal that pre-dates the comic book company’s major move into moviemaking and its acquisition by the Walt Disney Company.

In the film, Jared Leto plays antihero Michael Morbius, who attempts a desperate gamble in order to treat a rare blood disorder, one that makes him more familiar with a darkness inside of him.

After Pfizer, Moderna stars trial of Covid booster shots for…

Gigi Hadid, Zayn Malik ‘getting along fine’ for…