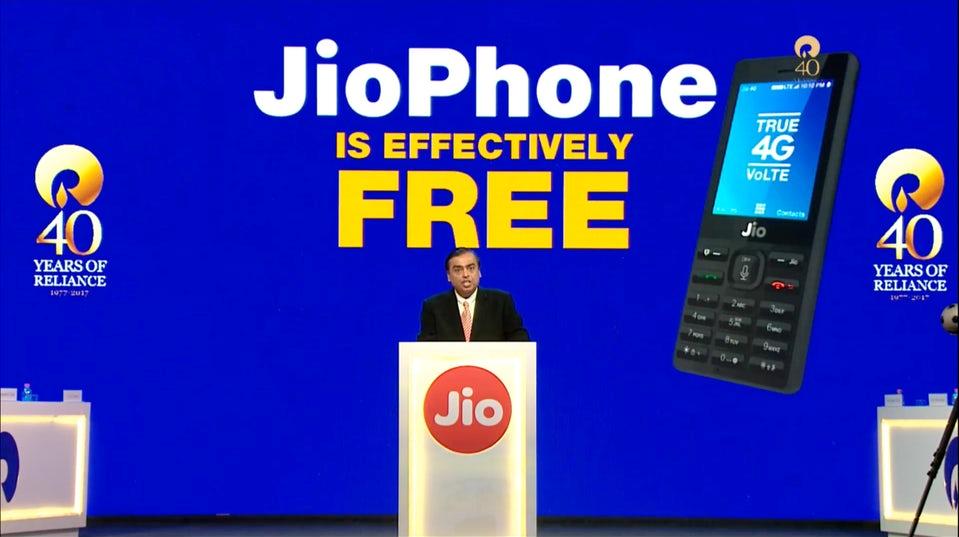 Mumbai: Industrialist Mukesh Ambani-led Reliance Industries Ltd (RIL) on Friday announced the launch of ‘intelligent smartphone’ JioPhone, which will be available for beta testing from August 15.

“The JioPhone will be available to all Indians for an effective price of Rs zero,” Ambani told the company’s 40th annual general meeting here.

The much-awaited phone was launched by Ambani’s son and daughter Akash and Isha Ambani. The phone will support 22 languages.

To protect against misuse, customers have to pay a fully refundable Rs 1,500 secuirty deposit while taking a JioPhone.

The pre-booking for the phone will start from August 24 and it will be given away on a first come first served basis. It will be available for all from September.

JioPhone, which is targetted at the 50 crore feature phone users in the country, will offer free voice calls and SMS to customers. For 4G data, customers need to pay Rs 153 per month.

He said JioPhone can be connected to any TV, not just internet TV, to watch videos.

The phone is pre-loaded with applications like Jio Cinema, Jio Music and others.

Describing JioPhone, Ambani said: “JioPhone is Made in India by young Indians for all Indians.”

Talking about Jio services, Ambani said: “Jio in next 12 months will cover 99 per cent of our country’s population.”

Jio has 125 million customers across the country now.

He said the telecom sector in India took 25 years to build 2G network for customers, “Jio will do 4G in three years.” (IANS)

Over 1,000 pilgrims leave for Amarnath amid tight security