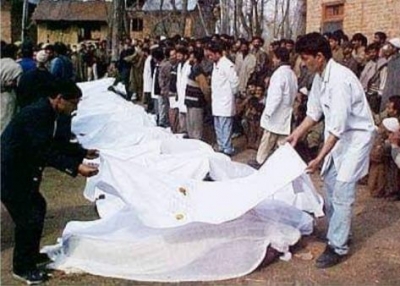 Srinagar: Following an application filed by the UT government, the Jammu and Kashmir and Ladakh High Court has ordered reopening of the Nadimarg massacre case in which 24 Kashmiri Pandits were killed by LeT terrorists in Pulwama district on March 23, 2003.

The application filed by the UT government through prosecution had sought recall of an earlier order that dismissed a criminal revision petition a decade ago and effectively closed the case.

The high court has now ordered that the trial will reopen on September 15.

Masked LeT terrorists in army uniform had raided the Nadimarg village on the night of March 23, 2003, where around 52 Kashmiri Pandits lived despite the migration of the majority of their community from the Valley in early 1990s.

The terrorists had lined up 11 men, 11 women and two babies who were killed with a volley of automatic gunfire.

Many of the terrorists involved in the massacre were either killed or captured in subsequent years.

Seven suspects were indicted after investigation and the case was transferred to the Shopian sessions court, which rejected a revision petition seeking examination of material and witnesses during the pendency of the trial.

The prosecution had said at that time in its application that witnesses had migrated out of the Valley and were reluctant to depose in the court out of fear.

The lower court had said that allowing a review was beyond its jurisdiction. Thereafter, the high court dismissed the revision petition on December 21, 2011.

After this, a new application was filed in 2014.

“For the foregoing reasons, the application of prosecution is allowed and the order dated 21.12.2011 passed by this court is recalled. The registry is directed to post the revision petition for rehearing on 15.09.2022,” Justice Sanjay Dhar said in his order.

When President, VP and PM wished Odisha people on Nuakhai 28 yrs ago