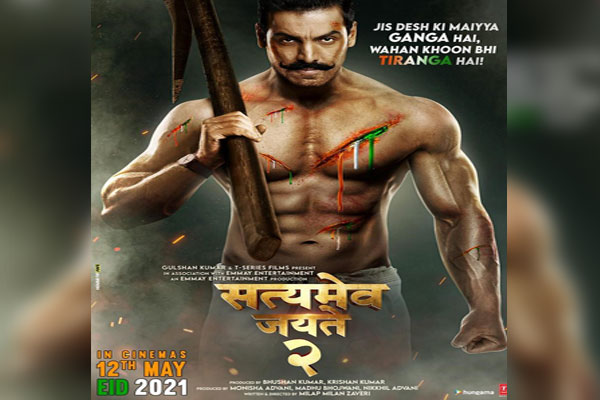 Mumbai:  The John Abraham-starrer Satyameva Jayate 2 will release on May 12, 2021 on the occasion of Eid.

While the first film, which had released in 2018, dealt with corruption, the sequel goes deeper exploring corruption across the worlds of police, politicians, industrialists and the common man.

Changing his story setting from Mumbai to Lucknow for the sequel, director Milap Zaveri said: “Creatively we changed the script to Lucknow as it gave us a chance to make it more massy and also make the canvas larger. Visually also, Lucknow adds to the scale and grandeur. The action of this film is going to be ten times more dynamic, heroic and powerful.”

“John is going to smash, rip and annihilate the corrupt like he never has before on the silver screen and (actress) Divya Khosla Kumar is going to wow audiences with her power-packed scenes, dramatic prowess, grace and beauty. ‘Satyameva Jayate 2’ like part one is a film of the masses and is also a celebration of action, music, ‘dialoguebaazi’, patriotism and heroism. Eid is a perfect occasion to release as it will offer entertainment galore,” he added.

John took to Twitter on Monday to share a poster of the film. Flaunting his abs in the poster, one can see the tricolour bleeding from his chest. He captioned the poster: “Jis desh ki maiyya Ganga hai, wahan khoon bhi Tiranga hai! (a country where Ganga is the mother, there even the blood is tricolour) #SatyamevaJayate2 in cinemas on 12th May, EID 2021.”