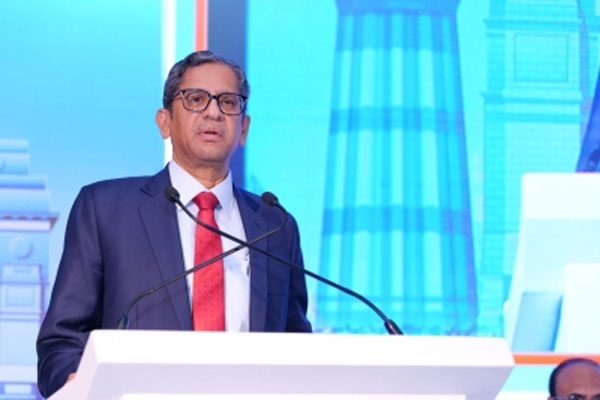 Chennai: The Indian justice delivery system should be Indianised for the benefit of the country’s population, said Chief Justice of India N.V.Ramana on Saturday.

He also said people should relate and understand the practices, procedures of the courts, the development of the case and efforts should be made towards that.

“It should not be like chanting of mantras in a wedding which most of us do not understand,” Ramana said.

Speaking at the foundation stone laying function at the Madras High Court here, Ramana stated that Indian people look up to the judiciary in times of distress with a firm belief that their rights will be protected by the courts.

Ramana said it is necessary to contemplate on how to improve the functioning of the judiciary and reach out to the people to fulfill their judicial needs.

“This is precisely why I have been a strong proponent of Indianisation of the justice delivery system,” he said.

According to him, Indianisation of the justice delivery system is a moulding of the judicial system for the benefit of Indian people and is a multi-dimensional concept.

“It calls for inclusivity, providing access to people to participate in the proceedings, removal of language barriers, reforms in practice and procedure, development of infrastructure, filling up of vacancies, augmenting the strength of judiciary and so on,” he said.

He said a Judicial Infrastructure Authority both at the national and state level should be set up to implement a National Court Development Project.

On the judicial vacancies, he said a proposal has been sent to the central government – to increase the sanctioned strength of judges and fill up the vacancies.

Another issue of Indianisation of the judicial system is the language used in the court.

The common citizen cannot relate to the practices, procedures of our courts. Efforts should be to make the general population an active part of the justice delivery process. The people should understand the ongoing process and development of the case.

“It should not be like chanting of mantras in a wedding which most of us do not understand,” Ramana said.

On the demand for use of regional language in the High Courts as provided in the Constitution, Ramana said it has been debated several times.

There were certain processes that prevented local languages from being adopted in the High Court proceedings. I am sure with the innovation in science and technology and the advancement such as artificial intelligence, some of the issues associated with the introduction of languages in the High Court may be solved in near future, he said.

The practice of law before constitutional courts should be based on one’s intelligence and understanding of law and not mere proficiency in language.

It is time some decisions are taken on these issues after assessment of pros and cons.

Inclusivity is one of the dimensions of Indianisation. Any profession having representation from all classes and sections will be beneficial to all, he remarked.

A strong proponent of higher representation of women from all classes and at the levels in the judicial system Ramana also said inclusivity does not stop with that.

“The social and geographical diversity of a nation must find reflection at all levels of judiciary. Then people will feel it is their own judiciary. A judge with a rural background is better placed to appreciate issues concerning the rural population. A judge from the marginalised section can understand issues of marginalised section,” he added.

On the demand for setting up of regional benches of the Supreme Court Ramana said he was not aware of the central government’s views on the private member bill on the subject introduced by DMK MP P. Wilson.

He said in the same spirit of accessibility, in consultation with other judges in the Supreme Court, a decision has been taken to continue online hearing of miscellaneous cases. On non-miscellaneous cases an advocate can seek permission of the court to appear online.

“This will enable advocates from all over the country to continue their practice before the Supreme Court. I hope this practice continues,” Ramana said.