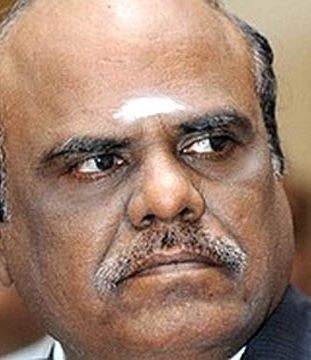 The Supreme Court on Tuesday held Calcutta High Court’s Justice C.S. Karnan guilty of contempt and ordered that he be jailed for six months.

The court ordered the Director General of West Bengal Police to constitute a team for the implementation of its order “forthwith”.

Holding Karnan guilty of contempt for his utterances against the Chief Justice of India and other judges of the apex court and the Madras High Court, a seven-judge bench headed by Chief Justice Jagdish Singh Khehar had barred the electronic and print media from carrying any of his statements.

“We are of the unanimous view that Justice C.S. Karnan is guilty of contempt of court and interfered with judicial process of grievous nature,” the court said in its order.

The bench also said it was satisfied in punishing him and sending him to jail for six months.

Karnan had written a series of letters making allegations against the judges of the apex court and the high court.

In the course of the hearing, the bench said that Karnan was medically fit as it noted that Karnan did not co-operate with the medical team that was set-up on the court’s order on May 4 to examine him.

It also said that the medical team too has not given any statement against Karnan.

In its last hearing, the apex court had directed the medical examination, which Karnan refused to undergo.

Resentment brews over non-inclusion of some MLAs in Odisha ministry