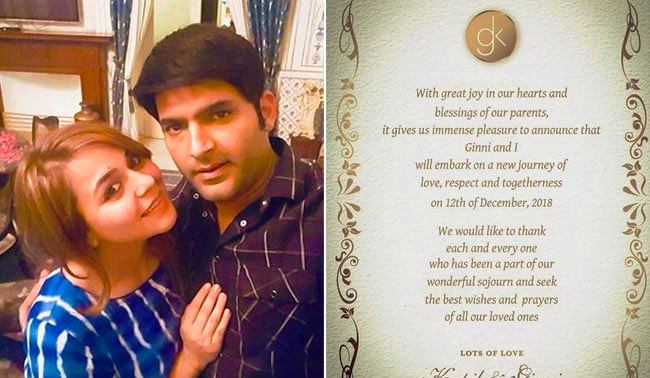 Bhubaneswar: With celebrity weddings taking fans by surprise one after another, here is one more official wedding announcement by another Bollywood personality.

Comedian and actor Kapil Sharma has finally shared the invitation card for his wedding with his long-time love Ginni Chatrath on December 12. The comedian took to Twitter to share his wedding card.

The white & golden coloured card has ‘GK’ written on top which stands for Ginni and Kapil.

“With great joy in our heart and blessings of our parents, it gives us immense pleasure to announce that Ginni and I will embark on a new journey of love, respect and togetherness on 12th December 2018,” the card mentioned.

As per sources the wedding will be held at Club Cabana in Jalandhar while the reception is scheduled to be held in Kapil’s hometown Amritsar on December 14.

The couple had publicly announced about their relationship and marriage plan on social media on March 18 last year.