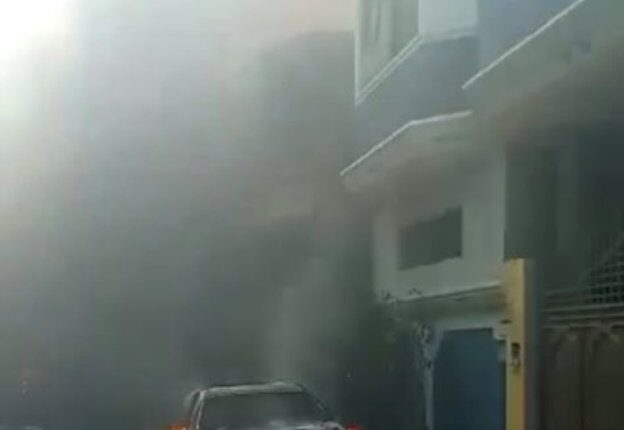 Karachi: More than 90 people have been confirmed dead after a Pakistan International Airlines (PIA) passenger plane crashed into a residential area in Karachi near the city’s airport, while a search and rescue operation continued on Saturday, according to authorities.

Sindh health officials have said that 97 people have been confirmed dead, while two survived the crash on Friday that took place in the densely populated Model Colony near the Jinnah International Airport, reports Dawn news.

According to PIA spokesperson Abdullah Hafeez, the A320 Airbus was carrying 91 passengers and eight crew members from Lahore to Karachi.

Eyewitnesses said the flight PK 8303 appeared to attempt to land two or three times before crashing.

Meeran Yousuf, the media coordinator for the Sindh Health Minister, told Dawn news that two passengers had survived and were brought to hospitals.

She identified the survivors as Zubair and Zafar Masood, who is the President of Bank of Punjab.

Moreover, she said that 19 victims had been identified so far.

A third person, who had earlier been identified as a survivor from the plane, was later confirmed to be a resident of the area where the plane crashed.

She was among the 11 persons who were injured on the ground.

Plane with over 100 onboard crashes in residential area in…

Meanwhile, PIA’s Chief Executive Officer Air Marshal Arshad Malik has ruled any possibility that the plane had any technical or any other issue.

“All standard operating procedures were followed before the plane’s takeoff,” The Express Tribune quoted him as saying in a news conference on Friday night.

He said the inquiry will be held to ascertain the cause of crash.

But Pakistan Airlines Pilots’ Association spokesperson Tariq Yahya, while speaking on Geo News, said that the plane seemed to be gliding at the end.

“Communications show that the plane did not have power at the end and was gliding and couldn’t make it to the runway,” said Yahya, adding that it didn’t have power when it was asked to climb to 3,000 feet.

The crash came just days after Pakistan allowed the domestic flights to resume operations after being grounded for days due to the coronavirus pandemic.

Prime Minister Imran Khan has offered condolences to the families of the departed and has ensured an immediate inquiry is instituted.

Federal Minister for Aviation, Ghulam Sarwar Khan, expressed his grief and sorrow over the tragedy and has instructed the Aircraft Accident Investigation Board to come up with a prompt inquiry report for the incident.

In Pakistan’s most recent deadly crash, a PIA plane in 2016 burst into flames after one of its two turboprop engines failed while flying from the remote north to Islamabad, killing more than 40 people.

The deadliest air disaster on Pakistani soil was in 2010, when an Airbus A321 operated by private airline Airblue and flying from Karachi crashed into the hills outside Islamabad as it came into land, killing all 152 people on board.