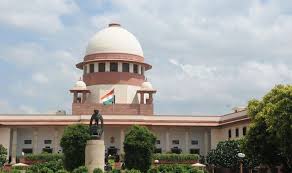 New Delhi: The Supreme Court on Thursday refrained from giving a specific date for the urgent listing of a plea seeking transfer of petitions from the Karnataka High Court, which is currently examining the permissibility of hijab in schools and colleges.

Sibal submitted that this deals with what is happening in Karnataka, and its spreading in the entire country. The Chief Justice told Sibal that the Karnataka High Court is already examining the issue and it should be allowed to decide it. “Why should we jump in at this stage? It does not look nice,” said the top court.

Sibal said the exams are just two months away and his client has filed the petition today (Thursday). The Chief Justice emphasized that let the high court hear the matter first.

Sibal submitted that the top court could list the transfer petition and keep it pending. The bench said after the top court interferes in the matter, then the high court would never hear it saying the issue is pending before the apex court.

Sibal insisted that this issue needs to be considered, as schools and colleges are closed. The bench reiterated, “Let HC hear it first”.

Sibal pressed that he is only asking the top court to list the petition, and if the high court does not pass an order, then this court can transfer it to itself and hear it. After a brief hearing in the matter, the Chief Justice, “we will see”.

The plea filed by Udupi college student Fathima Bushra said: “The said fundamental rights of the Petitioner have been violated with impunity on one hand by the Respondent No.2 which has denied entry to the Petitioner into the college, thereby debarring her from attending her regular classes until the Petitioner and similarly situated girls remove their headscarf/hijab”.