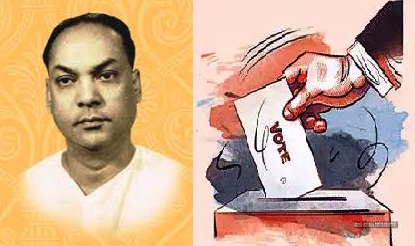 There has been some debate recently on the need for poets and writers to enter the election fray. In this context, the name that immediately comes to our mind is that of  Satchi Routray, the famous Odia poet who received Kendriya Sahitya Akademi award for his anthology of poems- ‘Kavita- 1962’and later, the prestigious ‘Gnanapitha Award’, the highest literary award of our Country. He is the second Odia to receive this coveted award after Gopinath Mohanty.

But the matter that interests us all is that he also tried his luck in the election arena, contesting Banapur Vidhan Sabha constituency on Congress ticket in 1961 elections.

Born on 13th May 1916 at Gurujanga, Khurda, Satchi Routray had spent his early days and school education at Khurda. But after getting expelled from Khurda High School for participating in agitational activities, he shifted to Kolkata to complete his school and Higher Education, where he ultimately settled down with a job. During his stay at Kolkata he came in contact with many writers, nationalist leaders and was heavily influenced by Marxist thoughts and ideas, which was reflected in his poems. He also came in direct contact with Mahatma Gandhi during the latter’s visit to Kolkata at the time of Hindu- Muslim riots. For a poet who had strong social commitments and who believed in purposive social action, it was not surprising that he chose to contest in elections.

Routray has mentioned in his autobiography, ‘Uttara Kaksha’, that he had requested for Congress party ticket to contest 1946 elections to Odisha Vidhan Sabha. He had also talked to Dr. Harekrushna Mahatab, the then Chief Minister of Odisha, to contest for Rajya Sabha. But he got his first opportunity to enter electoral fray only in 1961, when he was given Congress Party ticket to contest from Banapur Assembly constituency. His opponent was Raghunath Mishra, a local man, fighting on Ganatantra Parishad ticket.

The then Prime Minister Jawaharlal Nehru had sent an appeal to the voters of Banapur to vote for Routray, which was printed and circulated widely. Famous writer and Congress leader Surendra Mohanty and Manmohan Mishra also came to personally campaign for him. But unfortunately, Routray lost the elections. He writes in his autobiography, “I wanted the party ticket to fight from Khurda, which is my home constituency. But they gave me the ticket for Banapur. I had never visited Banapur or Balugaon area and was a total stranger to the constituency knowing nobody in the area.  The greatest obstacle to my campaign efforts in Banapur was complete lack of cooperation of the local Congress workers.”

Routray has not contested any elections after that. He left his job at Kolkata and came back to settle in Odisha in 1962. That year his book ‘Kavita-1962’ was published and it received Kendriya Sahitya Akademi Award in the following year. He was also honoured with ‘Padmashree’ in 1962 and finally went on to receive the most prestigious ‘Gnanapeetha Award’ in 1986.

May be, his defeat in the elections was a blessing in disguise. It propelled him to focus more on his literary pursuits and we got the Satchi Routray, we adore as a poet.

The writer is a columnist.