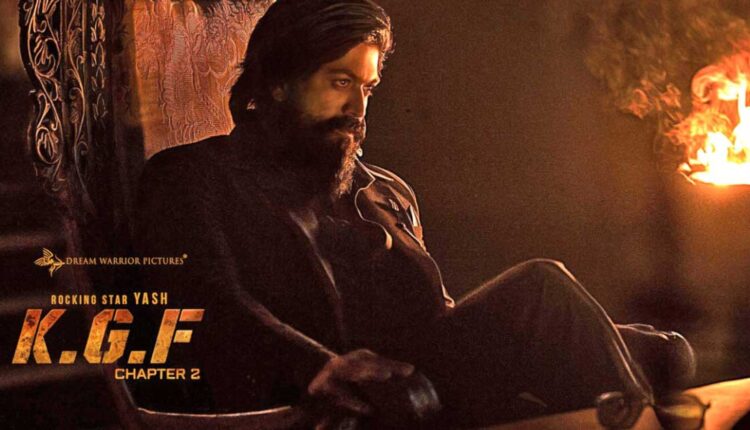 New Delhi: Shattering all records, the Hindi version of Yash-starrer ‘KGF: Chapter’ has surpassed the lifetime collection of Aamir Khan’s ‘Dangal’ by crossing the Rs 350 crore benchmark as it collected Rs 369.58 crore at the box office.

‘KGF: Chapter 2’ claimed the highest opening day, opening weekend and opening week for any film in the Hindi belt and became the fastest film to reach the Rs 250 crore benchmark.

Talking to IANS about the money minting action entertainer ‘KGF: Chapter 2’, trade analyst Karan Taurani of Elara Capital said: “I don’t see a collection of more than Rs 370-380 crores at a lifetime. Now, the film will definitely surpass ‘Dangal’. ‘Dangal’ was somewhere close to Rs 365-370 crores. So, its a big positive news for the industry because ‘Baahubali 2’ released somehwere around 4 years back in 2018.”

He added: “In a gap of four years you are seeing the record of ‘Dangal’ being broken once again. That too by a a regional film this is something which is showcasing the acceptance of regional content by the audience. Audience doesn’t want to shy away from the Hindi dubbed version kind of content.”

Taurani feels this is a “good news for the industry”.

“So, for them the supply is more widespread. It will attract more audiences and expand our Indian film industry because the Indian film industry has not grown more than 7-8 per cent in the last 10 years…. except for the GST impact where they grew by 15-20 per cent because the ticket prices are getting revised and collection numbers are increasing because of that…. These kind of surprises will definitely help the film industry grow much higher. That is one big point.”

According to boxofficecollection.in, ‘Baahubali 2’ starring Prabhas minted Rs 510.99 crore in Hindi while ‘Dangal’ collected Rs 387.38 crore in its lifetime at the box office.

According to Taurani, other Hindi films that touched the over Rs 300 crore benchmark include ‘Bajrangi Bahijaan’, ‘PK’, ‘Sultan’, ‘Sanju’, ‘Tiger Zinda Hai’, ‘War’ and then there is ‘Baahubali 2’ and ‘KGF’.

Taurani also feels that ‘KGF:Chapter 2″ earnings is going to have a “positive impact on the sentiments as well.”

He added: “A lot of producers shy away from making big films because they are unsure that they would do such box-office numbers but what this kind of film does is that producers will now have a clear mindset and there is a potential audience there to tap…”