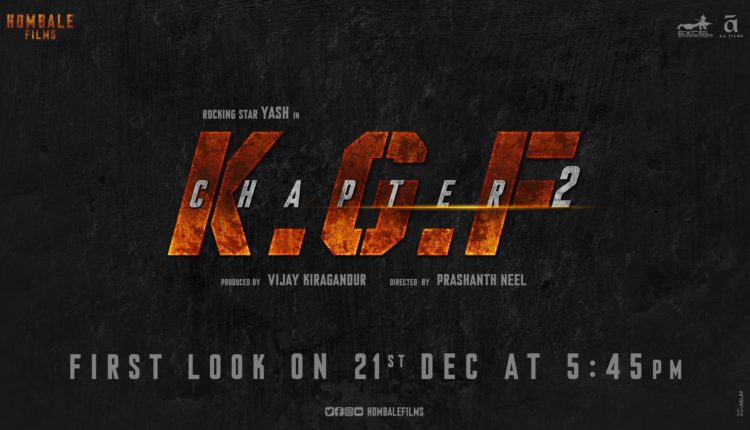 Bhubaneswar: Good news for KGF fans. The first-look of KGF Chapter 2 will be out on December 21, exactly a year after the release of its first chapter.

KGF Chapter-1 was released in Kannada, Tamil,Hindi, Malayalam and Telugu, which was made under the banner of Homabale films.It had created a huge sensation among the movie lovers and Kannada actor Yash achieved new heights in his career. The makers had announced that the film will have two parts-KGF Chapter 1 and KGF Chapter 2.

Watch: ‘KGF’ star Yash’s son Yatharv is all giggles as his mom gives him a nail trim

KGF movie is inspired from the real events that happened at the gold fields in the 70’s and a lot of research was done to set up the actual environment.Chapter 1 was a huge success and the makers has announced that the 1st chapter centered on Yash’s ‘rise’ as a gangster and the 2nd one will focus on his ‘fall’ as a gangster.

The film, written and directed by Prashanth Neel, is produced by  Vijay Kiragandur. The movie features Srinidhi Shetty playing the female lead, Achyuth Kumar, Anant Nag, Vasishta Simha, Malavika Avinash and Ramachandra Raju. Sanjay Dutt will be seen essaying the role of “Adheera” in the film.