The incident had come to the fore on November 19 after few girl classmates of the victim brought the matter to the knowledge of school authorities alleging that some senior (Plus II Second Year) students of the Higher Secondary School blasted firecrackers and committed nuisance inside a classroom. 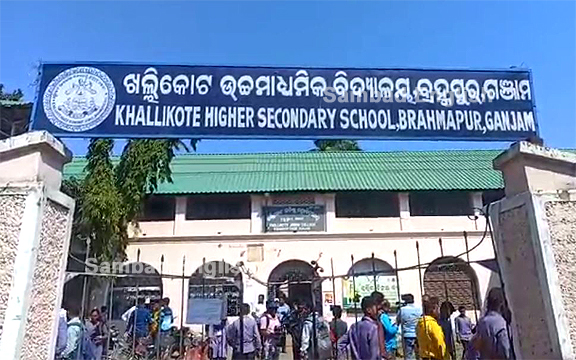 Berhampur: Days after a Plus II First Year girl student of Khallikote Higher Secondary School (Berhampur) alleged ragging by seniors in Berhampur of Odisha’s Ganjam district, seven students were permanently suspended from the campus. A notice from the office of the Principal, Khallikote Higher Secondary School dated 6.12.2022 stated that the decision was taken based on the recommendations of the anti-ragging committee which found the seven students guilty of the act. “As per the recommendations of the anti-ragging committee, the following students are permanently suspended from the campus. If they are found on the campus, police is free to take appropriate legal action against them. The members of the anti-ragging committee and squad and discipline are directed to intimate immediately to the local police station, if these students are seen in and around the campus,” the notice read.

The incident had come to the fore on November 19 after few girl classmates of the victim brought the matter to the knowledge of school authorities alleging that some senior (Plus II Second Year) students of the Higher Secondary School blasted firecrackers and committed nuisance inside a classroom. “They are entering the class in presence of teachers and creating a lot of disturbance. Girls are insecure in the classroom in presence of teacher. Those anti-social elements come to class and start burning crackers. Showing rude behavior using unparliamentary words,” the complaint letter read.

“I am being misbehaved and scolded in filthy language by some seniors for the last few days. Earlier, I had brought it to the knowledge of the Principal of my school. As no remedial step was taken by him, I complained in writing again today. I feel insecure to come to attend my classes. My parents asked me to stay at home for safety and discontinue my studies,” the victim girl had told mediapersons.

Subsequently, an internal anti-ragging committee had been directed for a detailed probe into the incident.

It is pertinent to mention, a similar allegation of ragging was previously leveled against some wrongdoers of the Higher Secondary School nearly two months ago. Based on the allegation of some girl students, the school authorities had expelled six accused students for ten days from its campus.

The incident surfaced close on the heels of ragging by some senior students of Binayak Acharya College in the city and the subsequent rustication order slapped on the 12 accused by authorities of the educational institution on November 17.