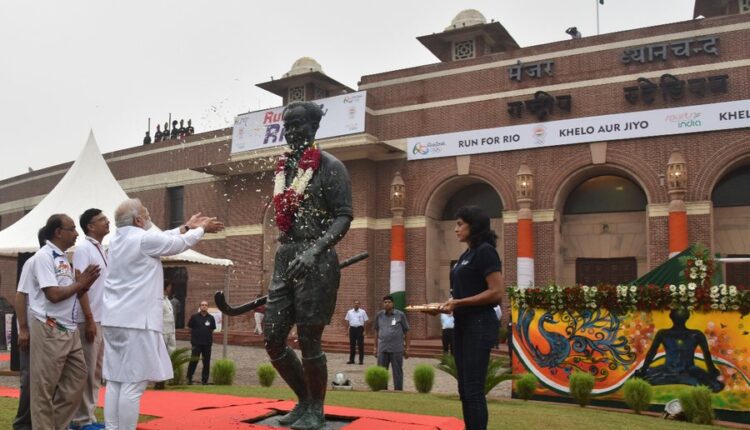 New Delhi: Prime Minister Narendra Modi tweeted on Friday that he was naming the nation’s highest award for sports in response to “many requests from citizens across India”. It will now be called Major Dhyan Chand Khel Ratna Award after the hockey wizard who won three Olympic gold medals for India from 1928 to 1936.

Instituted in 1991-92, the Khel Ratna Award was named after the late former prime minister, Rajiv Gandhi, and India’s chess prodigy Viswanathan Anand was its first recipient.

The Award is administered by the Sports Ministry and given away every year at a special function by the President of India at Rashtrapati Bhawan.

PM Modi’s move has followed the outpouring of positive public sentiments after the superb showing of the Indian men’s and women’s hockey teams at the Tokyo Olympic Games.

On Thursday, Manpreet Singh-led men’s hockey team won a medal — bronze — at the quadrennial showpiece after more four decades. The women’s team fought tooth and nail before losing to Great Britain 3-4 in the bronze-medal match on Friday.

The Indian women’s hockey team had defeated world No. 2 Australia in the quarterfinals, but went down to Argentina in the semifinals and played for bronze against Great Britain on Friday.

Soon after the women’s team lost the bronze-medal match, PM Modi tweeted, “We narrowly missed a medal in Women’s Hockey but this team reflects the spirit of New India — where we give our best and scale new frontiers. More importantly, their success at #Tokyo2020 will motivate young daughters of India to take up Hockey and excel in it. Proud of this team.”

Retweeting PM Modi’s announcement about the Khel Ratna being named Major Dhyan Chand Khel Ratna Award, Union Sports Minister Anurag Thakur said, “Major Dhyan Chand is India’s most legendary & loved sporting icons; it is only befitting that India’s Highest Sporting Honour be named after him. His life and achievements have inspired generations of sportspersons who have achieved glory for India.”

Soon after the conclusion of women’s hockey match, Thakur tweeted, “India’s daughters — our determined athletes; we are immensely proud of you! A giant leap of faith & fighting spirit by our women’s hockey team; a legacy that will inspire us to do even better! You have shown us the way. #Tokyo2020 #TeamIndia.”