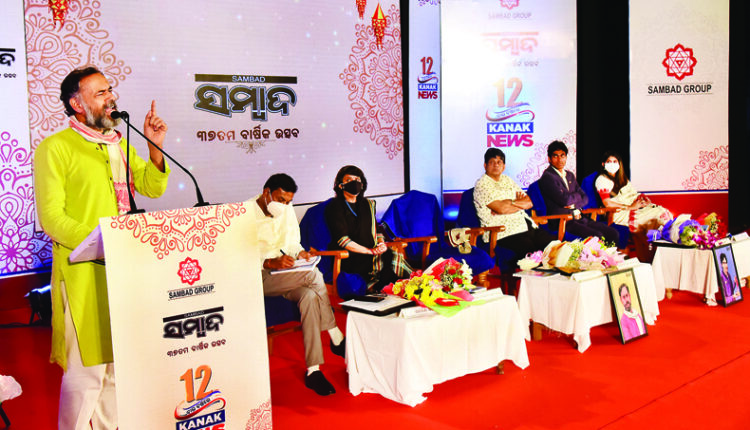 Attending the 37th Foundation Day of ‘Sambad’ and 12th Birth Anniversary of ‘Kanak News’ at Rabindra Mandap here yesterday as the Chief Guest, Swaraj India President Yogendra Yadav referred a book titled ‘How Democracies Die’ authored by Steven Levitsky and Daniel Ziblatt that highlights degradation of democracy in countries like America, Russia and Turkey. Even though the book is not based on India, the contents are instructive to our country in many ways.

“It is being repeatedly said that there is no censorship in the media today. But sometimes it seems that if there was a censorship it might have been better. Because if there was a censorship, the reader would know that what is being said in the media is not the statement of the concerned media, but the news being served on the orders of the government. But now there is a worse situation than the censorship which is not visible. Now not only orders from the government, instructions are also coming from political parties and business establishments. Now, the dealership, courtship, relationship and censorship can be seen with invisible censorship,” Yadav said.

Explaining this, Yadav said that people who are interested in a particular ideology are being allowed to move forward in the media. As a result, reports opposing constitutional values ​​appear on the front page of newspapers. These days, personal needs, interests, and weaknesses of all people, from judges to editors and proprietors, are kept on the records. The leaders with vested interests are using the files to get their job done. On the other hand, such an environment is being created in which the journalists or editors are thinking about whether or not to write a controversial news story or article. The media cannot question the ruling party or the Government because of this kind of ‘censorship’. The Publishers do not consider it safe to publish a book “To Kill A Democracy” written by Debasish Roy Chowdhury and John Keane. This is more dangerous than censorship.

Despite it, the print media in the country is still the major means for publishing true news even today, the social activist said.

“At a time when print media around the world is set to shrink, media house like ‘Sambad’ is expanding its wings. The print media is now reaching out to first-generation students. Nonetheless, the honest media organisations are taking their last breath in the country. India ranks 142nd in Media Freedom Index of 180 countries. Even the country like Sri Lanka is in better position than India in the index. Still, we have been claiming that India is the largest democracy in the world. During such critical period, news or debate should be made two-fold. A free brain is required along with a desire to speak and listen. Today, India needs to have strength and courage to do this,” Yadav said at the event.

Presiding over the programme, Soumya Ranjan Patnaik, Editor of ‘Sambad’ said, “The democratic system in India has taken a strange turn today. The duty of a journalist is to question the ruling party. But today, the mainstream media prefers to put question to opposition parties. A few years ago, democracy had been transformed into Dalatantra (political nepotism). But there are aspersions whether political nepotism will survive today. Because it appears, bureaucracy has taken over it and there comes the pivotal role of media to overcome the crisis,” adding that the writers, intellectuals and educated people have important role to play in upholding the truth.