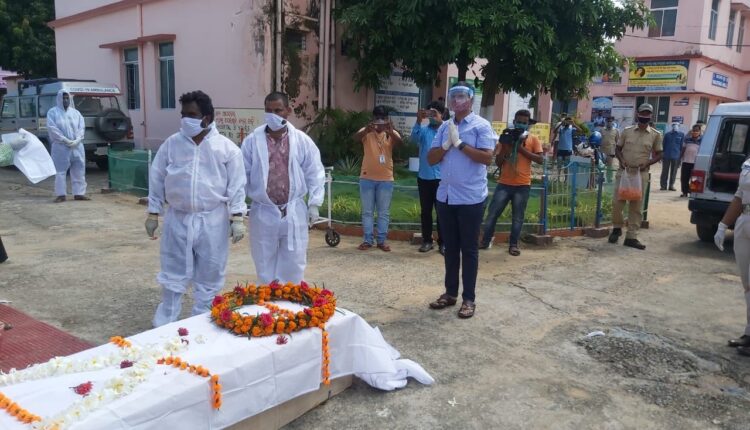 Berhampur: Hours after relatives of a COVID Warrior in Ganajm district refused to claim the body, their apprehensions came out true.

Assistant Sub-Inspector (ASI) Rabindranath Behera of Bhanjanagar Court, whose body was kept outside Kodala Community Health Centre (CHC) for several hours today, was infected with Coronavirus, informed district SP Brijesh Kumar Rai. His body was kept there for some hospital formalities, he added.

“Behera was a frontline Corona Warrior and died due to the virus. He was our colleague and we have come to pay our last respect to him,” the SP said.

Sources said the ASI, a resident of Beguniapada, was suffering from cold and fever for the last couple of days. He was admitted to the CHC last night. However, he died at the hospital after a few hours and his swab reports came out positive after a antigen test.

This morning, his body wrapped in a  cloth was left unattended outside the hospital for several hours with no one coming near it suspecting COVID-19 infection.  In fact, his family members did not come to the hospital to claim the body fearing the virus transmission. However, two journalists wearing PPEs volunteered and kept the body in a coffin.

Soon after the reports surfaced on media, Ganjam SP along with other police personnel reached the spot to take stock. Later, the COVID Warrior was given state honours at the CHC in presence of police officials and district officials. After that, the body was sent to Berhampur for his last rites.