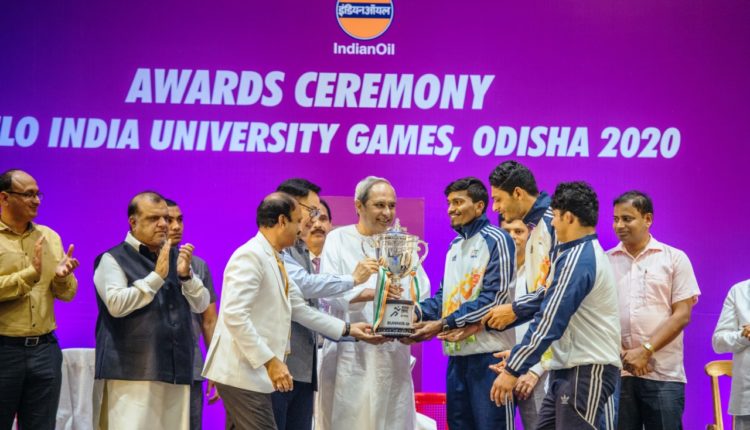 Bhubaneswar: Panjab University pipped Savitribai Phule Pune University with a last-gasp effort to be crowned champions of the inauguration edition of the Khelo India University Games.

Trailing by just one gold on the penultimate day, Panjab snatched the last two gold in boxing to topple Pune University, who could only manage one athletics gold on the final day. The two dominant universities ended up with 17 gold each. But Panjab University, with a total tally of 46 medals (19 silver, 10 bronze) as against Pune’s 37 (11 silver, 9 bronze), walked away with the coveted trophy. The second runners up trophy went to Punjabi University, Patiala with a total medal tally of 33 (13g, 6s, 14b)

“The first edition of the KIUG has been truly successful. All the participants have given their best and many of them have shown great potential,” Rijuju said. “Our aim now is to organise the Khelo India University Games regularly and make it, along with the Youth Games, the platform that paves the way for our future Olympic medallists. Our aim is to get into the top 10 in the medals tally after the 2028 Olympics,” he added.

Chief Minister Patnaik too expressed satisfaction in the way his state Odisha organised the Games. “I’m extremely glad that KIUG 2020 has been organised in such a smooth manner. I’m sure it will help young athletes in achieving great heights for the country,” he said.

Host university KIIT’s founder Achyuta Samanta thanked everybody involved in making the Games a success and pointed out that they had less than two months to put everything in place and pull it off.

Earlier in the day, steeplechaser Komal Jagadale set a new All India Universities record with a time of 10:26.63 to give Savitribai Phule Pune University a two-gold medal lead.

But then, Sawan Gill secured a walk-over from Anik Verma in the 91kg final while Sagar won the +91kg gold, when Suryaveer Sehrawat (Chaudhary Charan Singh University) abandoned the bout after the opening round, to garner the bragging rights for Panjab University.

In other exciting events, KIIT’s Dutee Chand completed a sprint double while Guru Nanak Dev University edged out Kurukshetra University 33-31 in a tense men’s kabaddi final. The Amritsar team made light of the 16-21 deficit that stared them in their faces at the break.

By winning the heptathlon bronze medal behind Sonu Kumari (Lovely Professional University) and Sarmistha Halder (University of Calcutta), Akshatha of Karnataka State Law University ensured that a student of law would add to the diverse nature of medallists. With three swimming gold, student of medicine Damini Gowda led those from Health universities on the podium.

As many as 64 universities claimed at least one gold while 113 institutions went home with at least one medal after 10 days of competition. Swimmers Sadhvi Dhuri (Savitribai Phule Pune University) and Siddhant Sejwal (Panjab University) were the most successful athletes at the Games with five gold each.