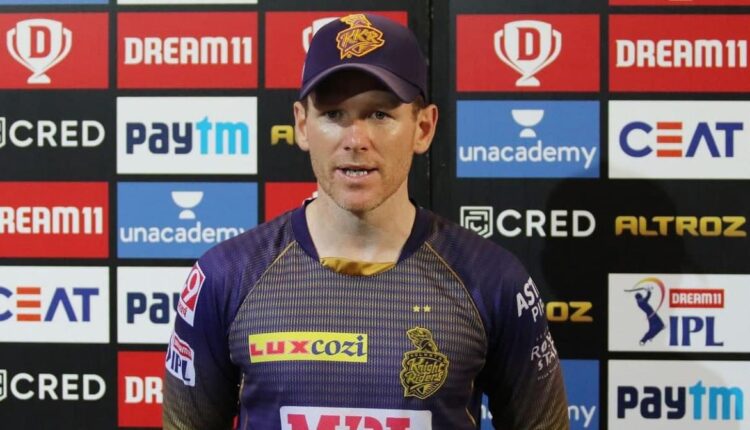 Dubai: Indian Premier League (IPL) side Kolkata Knight Riders have been fined after they maintained a slow over-rate during their match against Mumbai Indians at the Zayed Cricket Stadium, Abu Dhabi on September 23 (Thursday).

“As it was the team’s second offence of the season under the IPL’s Code of Conduct relating to minimum over-rate offences, Kolkata Knight Riders captain Eoin Morgan was fined Rs 24 lakhs,” an IPL statement said.

“The rest of the members of the playing XI were each fined lesser of either Rs 6 lakhs or 25 per cent of their individual match fee,” the statement added.

In the match against the Rohit Sharma-led Mumbai Indians, Rahul Tripathi and Venkatesh Iyer dazzled with the bat as the Kolkata franchise won by seven wickets.

While Iyer scored his maiden IPL fifty, Tripathi slammed an unbeaten 74 off 42 balls as KKR chased down the target with 4.5 overs to spare.

Needing 156 runs to win, KKR made a scintillating start, courtesy Shubman Gill and Iyer, and moved to 40 in 17 balls. However, the partnership was broken as Jasprit Bumrah disturbed the timber to send Gill packing.

Tripathi, who joined Iyer in the middle, made sure that KKR did not lose momentum. The right-hander and Iyer added 23 runs in the final three overs of the powerplay as KKR moved to 63/1.

The big-hitting did not stop as Iyer and Tripathi continued to go after the MI bowlers, scoring 48 runs in the next four overs to take KKR to 111/1 after 10 overs. In the next over, the left-hander notched up a fine fifty – his first in the IPL – in 25 balls.

Tripathi then completed his half-century – seventh in the IPL – in the 12th over as KKR continued to make merry with the bat.

Morgan said later during the post-match press conference that, “It’s been a long time since we’ve played like this. Baz (coach Brendon McCullum) has taken over for almost two seasons, so the way we are playing is now getting into his style. To hold such a strong Mumbai team, and chase it down in the manner we did gives us confidence. We were trying to fit Iyer into the XI with a lot of talented guys, and it’s fantastic with the manner he has scored runs. We never put a number on him, on how many games he will get.”

Bihar labourer receives Rs 9.99 crore in his bank account; here’s what happened next