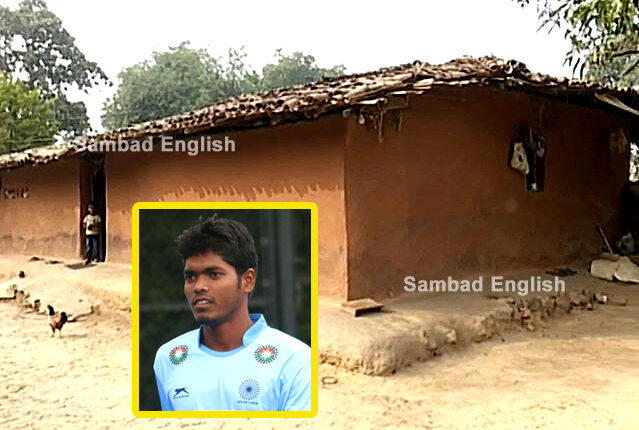 Rourkela: Meet this tribal hockey star Nilam Sanjeep Xess from Sundargarh of Odisha, who has been living in penury for years in a mud and thatched house in the district. He is to represent the Indian team in the upcoming FIH Odisha Hockey Men’s World Cup 2023 Bhubaneswar-Rourkela hockey matches.

Nilam was born in a remote village but strived for an identity as a hockey player. With the mega sports event to be held at Kalinga Stadium in Bhubaneswar and Birsa Munda International Hockey Stadium in Rourkela from 13 to 29 January 2023, his co-villagers are quite excited to witness his performance.

“Children of our village are very fond of hockey right from their childhood. We had never imagined that Nilam Xess will rise up to this level by playing for the district, the State and the country. He has now proved it …. We are feeling immensely happy,” Kadobahal sarpanch Lucia Mamata Kindo said.

“We hope that my younger brother (Nilam Xess) will play well on behalf of his team and give out his best performance in the men’s hockey World Cup matches,” Nilam’s sister Ashrita Xess stated.

Defender player Nilam is the younger son of Bipin Xess from Saranapali village of Kadobahal panchayat under Kuanrmunda tehsil and 12 km away from Biramitrapur. Nilam has a brother and two sisters.

The small kutcha house was built around 40 years ago with money borrowed from a few local villagers. Nilam’s father Bipin and mother Jira work as daily wagers and the family is below the poverty line.

Notably, during his childhood days, Nilam practiced hockey along with his elder brother and some friends. They were using bamboo sticks and balls made from torn clothes for playing the game.

Sundargarh district is better known for producing a number of talented hockey players, who have scaled great heights in their sports careers. Most of the players coming from this district have unprivileged family backgrounds and after a lot of hardships, the players reach the international level.

Nilam was a part of the Indian hockey team that became Silver Medalists during the 12th South Asian games held at Guwahati and Shillong. Later the same year, during the fourth U-18 Asia Cup, he led the Indian team toward a Gold Medal.

The noted defender from Odisha won Bronze Medal along with his teammates while representing the Indian youth team during the five-nation U-23 men’s hockey tournament in Belgium.