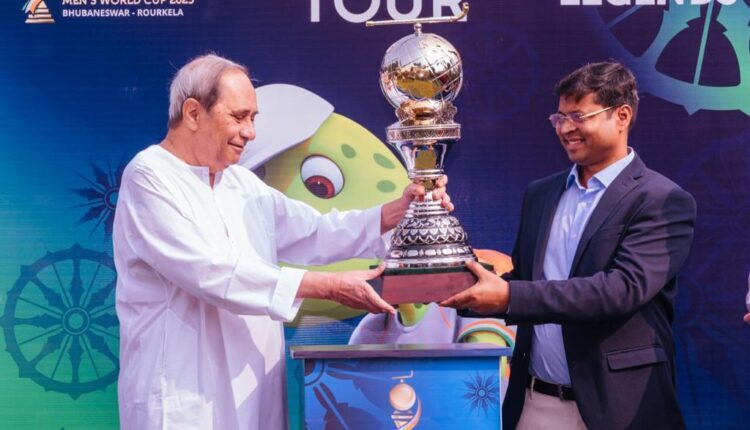 Bhubaneswar: The FIH Men’s Hockey World Cup-2023 trophy is all set to return to Odisha tomorrow (December 25) after travelling across 13 states and one Union Territory in the country.

The Trophy Tour of the Men’s Hockey World Cup-2023 had been kicked off in the city here on December 5. Chief Minister Naveen Patnaik had handed over the trophy to Hockey India President Dillip Tirkey on the occasion.

The trophy will arrive at Biju Patnaik International Airport (BPIA) here at 11.30 am on Sunday. Sports and Youth Services Minister Tusharkanti Behera, Hockey India President Dillip Tirkey, Mayor Sulochana Das and senior officials of the Sports department will receive the trophy at the airport, said an official.

The trophy will be displayed at Biju Patnaik Square near the airport from 12 noon to 12.30 pm. Then, the trophy would be taken to Lingaraj Temple via New Airport Square, Sishu Bhawan Square, Mausima Flyover and Ratha Road, said the official.

“The trophy will reach Lingaraj Temple at 12.50 pm and leave the shrine premises at 1.20 pm. A group of priests from Puri will recite Vedic hymns at the shrine during the arrival of the hockey world cup trophy,” he added.

The trophy will be taken to Esplanade Mall at Rasulgarh through Ratha Road, Kalpana Square and Puri-Cuttack Road. It will be displayed at the mall till 2.20 pm and then taken to SOA campus through Rasulgarh Square, National Highway 16, Fire Station Square, Patas Ban Square, Kalinga Studio Square and SUM Hospital Square.

Notably, Odisha will host the Men’s Hockey World Cup-2023 at Kalinga Stadium in the capital city and Birsa Munda Stadium in Rourkela from January 13 to 29.

Tunisha Sharma, all of 20, commits suicide on the sets of a TV serial