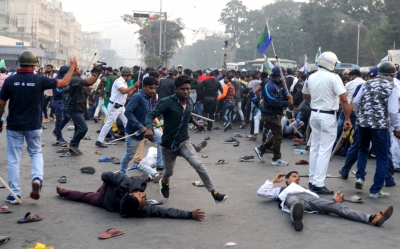 Kolkata: The Esplanade area located in the heart of the city in central Kolkata turned into a battlefield on Saturday following clashes between the police and All India Secular Front (AISF) supporters.

The police have arrested the lone AISF representative in the West Bengal Assembly, Naushad Siddique.

The root cause of the chaos was a development at Bhangar in South 24 Parganas district on Saturday morning, where supporters of AISF and Trinamool Congress had clashed with each other.

The AISF leadership claimed that their supporters were harassed by the ruling party workers when they were going to attend a function at the local AISF office to mark the party’s foundation day.

However, the Trinamool leadership claimed that it was their supporters who were attacked by AISF-backed ‘goons’, who even ransacked three Trinamool party offices.

Since Saturday morning, there were incidents of sporadic violence at Bhangar, the impact of which later spread to Kolkata.

Late on Saturday afternoon, the AISF supporters led by Siddique blocked roads in the Esplanade area, protesting against the Bhangar violence.

They alleged that the attacks on AISF workers were carried out by the ruling party’s ‘goons’ led by former Trinamool MLA from Bhangar, Arabul Islam. They also demanded immediate arrest of Islam.

As the huge police contingent tried to disperse the mob, the AISF supporters retaliated with brickbats and bamboo sticks. They even removed the guardrail barricades set up by the police.

The cops first resorted to lathi charge before firing teargas shells in their bid to control the mob. Several AISF supporters and some policemen were injured in the clashes.

After the police arrested Siddique, the AISF supporters became even more agitated and another round of clashes ensued between them and the police.

The clashes threw traffic in the area totally out of gear.