The Lost Land of Konark TV 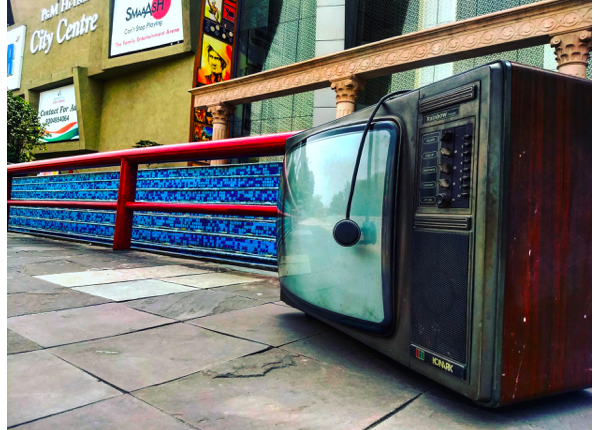 We all find ourselves reminiscing over things of the past, the simpler lives of less pollution, without the hubbub of traffic on the streets, and the happiness that came by doing little things. The price of affording luxury and worldly comforts is hefty as it keeps us on our toes with a fast-paced strenuous work cycle. At the same time, vintage articles like your grandfather’s old watch or the letters your parents exchanged before telecommunication took charge, bear a very sensitive spot in everyone’s heart. 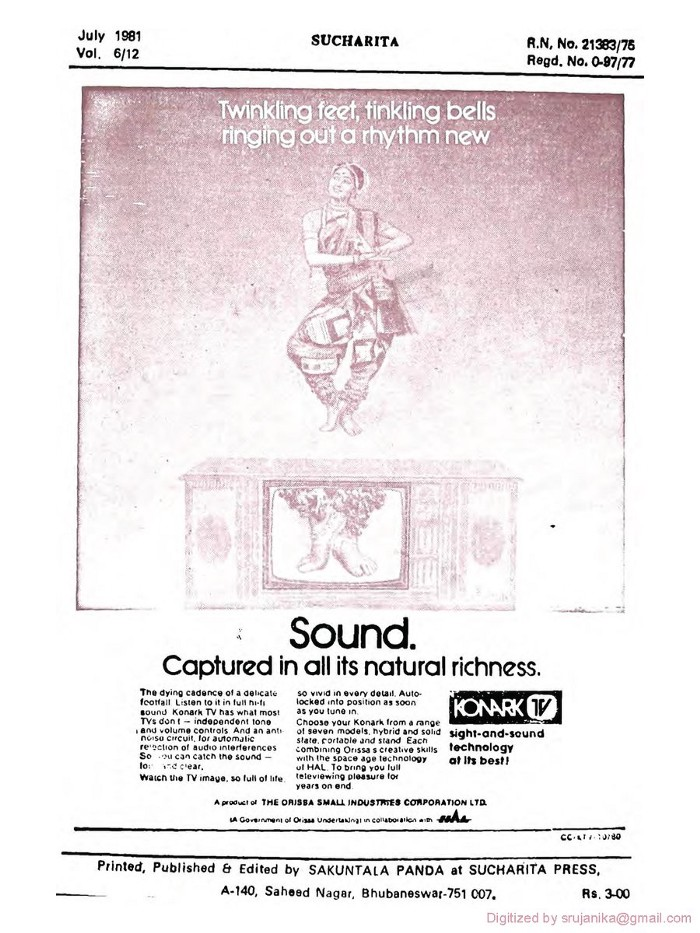 Before the advent of sleek products launched by multinational conglomerates like Sony or Samsung, a popular name that lit Indian households was our very own Indigenous, TV called Konark.

“Konark, a living legend in name and perfection” 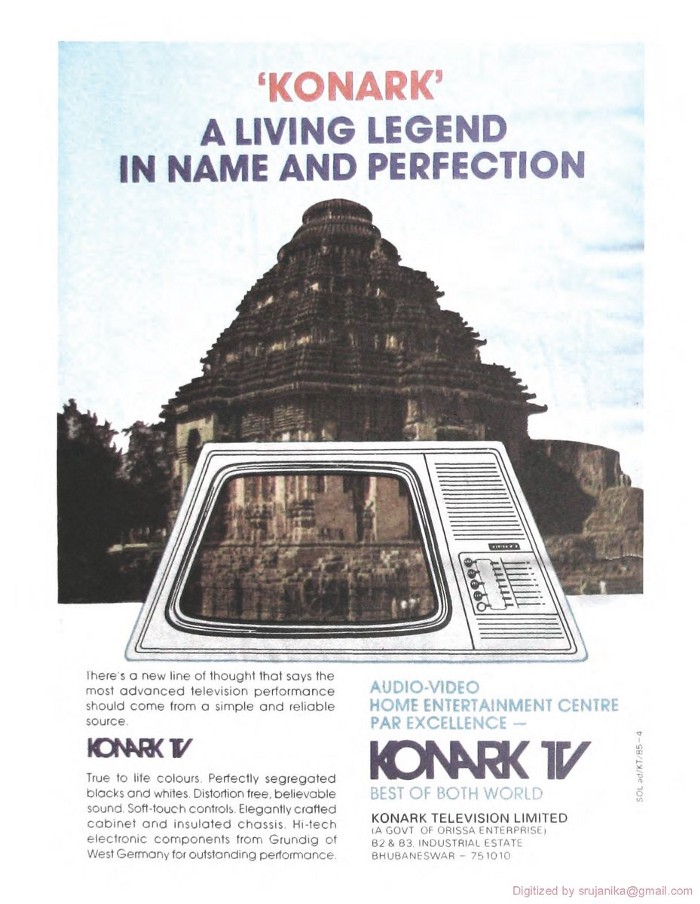 For those of our Gen Z kids who might not be familiar with the lost glory of the TV, Konark Television Ltd., named after the celebrated 13th century Konark ‘Sun’ Temple was created by the government of Odisha (then Orissa) in 1973.

Konark, though it was introduced in Odisha, soon gained popularity all across the nation for its affordability and came out as the most well-loved idiot box amongst other government-run companies like Uptron and ECTV, and private companies like Nelco, Weston, and Dyanora.

The TV came with additional notable features such as a shuttered cabinet and four well-crafted wooden legs. A blog post penned by Professor Susant Kumar Purohit from Sambalpur tastefully describes the beauty and the fineness of the TV.

“Built with a beautiful shuttered cabinet, it had four well-crafted wooden legs, so that it did not need a separate stand or table,” Purohit wrote recalling watching the live telecast of the famous 1983 Cricket World Cup that India had won.

Umasankar Mishra, a former dealer of TVs explained that initially, the demand for coloured TVs was so high that some dealers even used to trade them in the black markets. 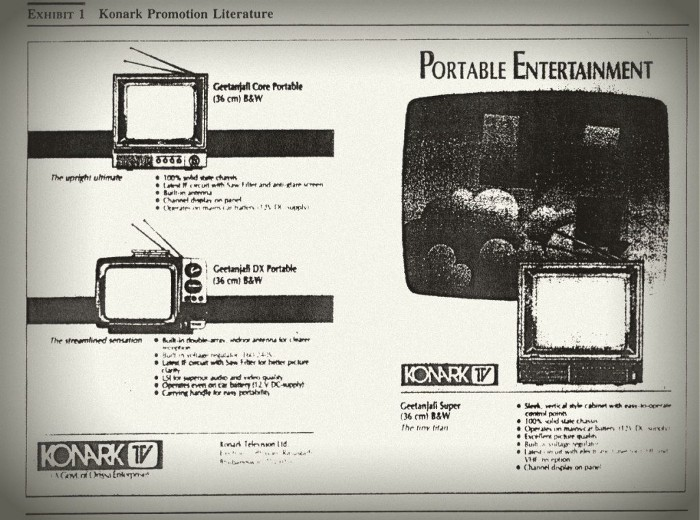 Another user from the 90s looks back upon the good old days and describes her memories of the TV. “Konark had quite a reputation. I remember very clearly when we bought our first Konark TV. It was 1983, and I was 18 years old. It was a colour TV and had no remote, only wooden knobs that had to be turned like an equalizer,” Bhubaneswar-based school principal Rinku Sarangi told The Print.

During the 80s, popular Doordarshan classics including epics like the Mahabharata, and Ramayana along with shows like  Chitrahar and the Mexico-soap-inspired family drama, Hum Log was a significant part of the people’s life. Looking back at one’s fresh years of teenage, one name that stands out is ‘Konark’, the epitome of good television.

Konark TV the pride possession of every Odia household

Konark TV was also renowned for its contribution to the cultural history of Odisha. Starting from a handful of 19 employees to catering to more than one lakh sets in a year the company stood ahead of its rivals. At one point in time, the brand was viewed as the number one TV in India. As a result, the star company called the national spotlight to the state of Odisha. 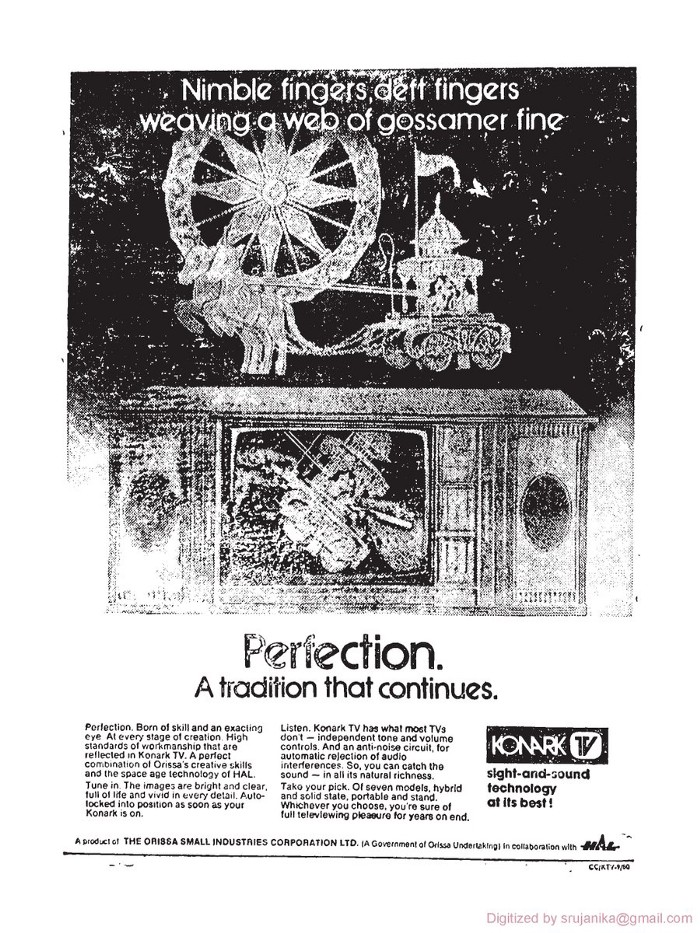 Apart from the 21-inch Rohini Deluxe TV, Konark also stood out for its distinguished ads. The most initial ones were the ‘With Best Compliments from…’ ads that were used to list the various models offered by Konark. These ads were made by DTP operators and were generally plain but are still witnessed wearing a vintage glow. 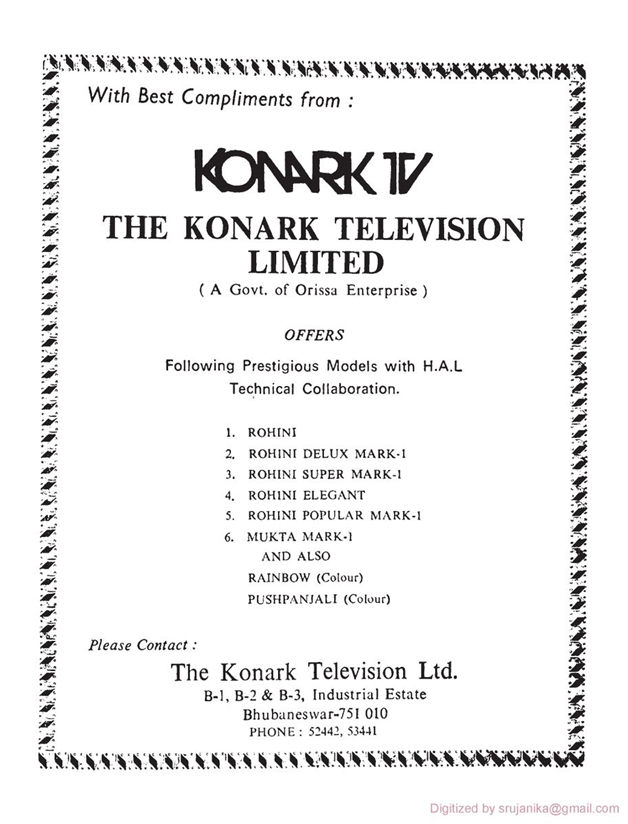 The designs soon underwent a radical transformation that provided an insight into Odisha’s rich heritage & craftsmanship. Recently, A Hyderabad-based Graphic designer Lalit Mohan Sahoo released an account on the history of Konark TVs and its ads.

One of his most admired ads was Deepika Chitkalia’s feature in an advertisement for Konark Senator. The actress had gained national fame for playing Sita in DD’s Ramayana TV serial. The ad was meant to appeal to the higher-income groups to view Konark as a lifestyle choice. 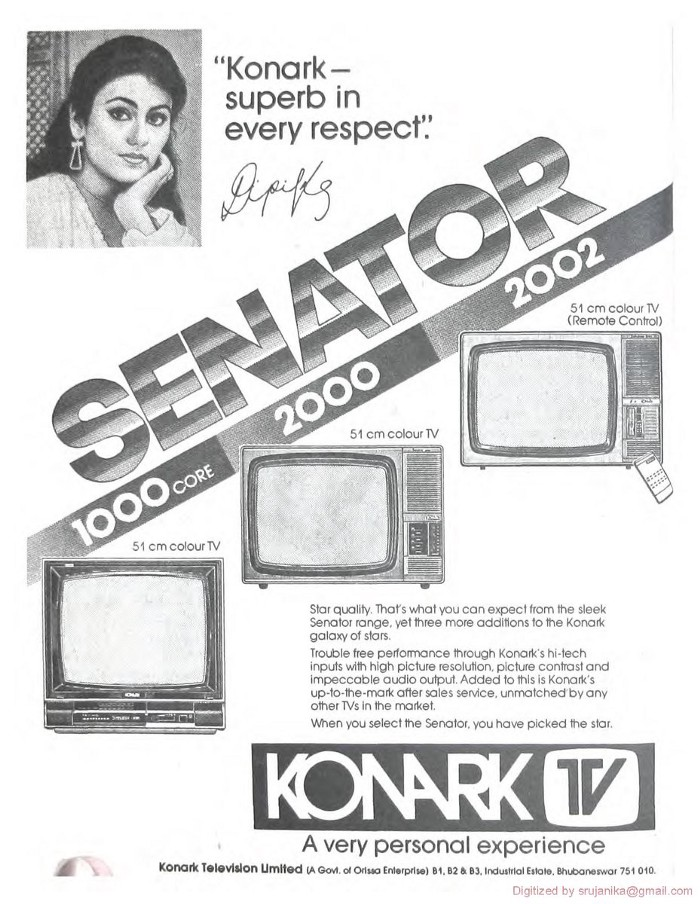 Gradually, after establishing the reputation of the state’s favourite TV, Konark’s focus shifted to ads that would call for national recognition. The use of images and motifs that would appeal to a wide Indian audience grew in popularity.

The great collapse of the Konark empire

The illustrious Konark temple was built in the 13th century CE by King Narasimhadeva I hailing from the Eastern Ganga dynasty. ‘Konark’ means the sun and the four corners. The temple was called the Black Pagoda attributing to its dark facade by the Europeans who used it for navigation for their ships. Although the exact reason behind the collapse of the Konark temple remains a mystery, popular beliefs blame invaders who attacked the temple, leading to its collapse. 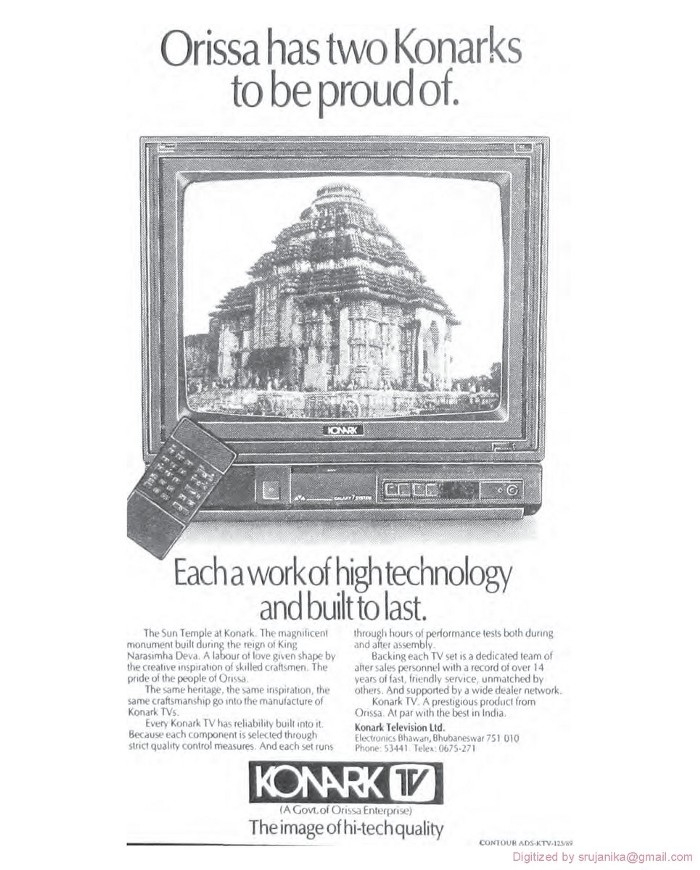 Unfortunately, the legacy of our beloved Konark TV also bore a similar fate. Following, the liberation policies that were introduced by the Indian government in 1990, the brand faced immense competition from foreign companies.

Competitive brands with enhanced features at relatively lower prices enabled cut-throat competition in the market. Konark TV could not afford to maintain its profitability at lower prices and gradually saw customers opting for rather economical options. This pushed Konark TV into gargantuan debts. Additionally, the lack of support offered by the Indian government eventually led to its closure.

Despite its poignant end, Konark TV is still remembered with a cherry smile of nostalgia from those early days of a simpler life. For, The Lost Land of Konark TV reminds us that Konark was always much more than just a TV.