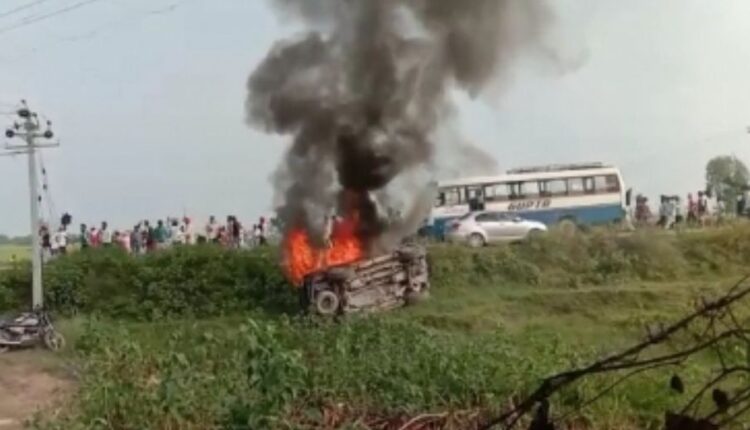 New Delhi: The Uttar Pradesh government on Monday told the Supreme Court that Lakhimpur Kheri violence case, where eight people lost their lives, was a grave offence, and no untoward incident happened after Ashish Mishra, prime accused in the case was granted bail, and he was also not a flight risk.

However, the top court sought clarity from the state government on its stand on SIT recommendations for cancellation of bail granted to Mishra.

At the beginning of the hearing, a bench headed by Chief Justice queried senior advocate Mahesh Jethmalani, representing the Uttar Pradesh government, “It is your choice, I can’t insist… You have not responded to the letter. This is not a matter where you’ve to wait so much.” The bench pointed at the two letters written by SIT to the additional chief secretary, home, Uttar Pradesh and the judge monitoring the Lakhimpur violence case probe recommending cancellation of bail granted to Mishra on February 10 by the Allahabad High Court.

Jethmalani said, “We’ve forwarded the report to the state…whether to file SLP… the state government has provided security (to all 98 witnesses in the case)…each of the witnesses contacted over phone.” He added that none of the witnesses have expressed any apprehension with the security provided.

However, the bench, also comprising Justices Surya Kant and Hima Kohli, pointed out to Jethmalani that the matter at hand is whether bail granted to Mishra is correct or not? The bench questioned the detailed examination of evidence like the post mortem report while granting bail to Mishra, son of Union minister Ajay Mishra, by the high court in the case. “This way of going into merits and going into wounds, etc., is unnecessary for the question of bail,” noted the bench.

Jethmalani submitted it was a very serious offence, and a grave offence, however, the high court took a different view despite the state government’s objection. “He (Ashish Mishra) is not a flight risk, no untoward incident happened after he was granted bail”, said Jethmalani. However, the Chief Justice pointed out that the matter was not about protection granted to witnesses, and not filing the SLP (special leave petition by state government against bail to Mishra).

The Chief Justice said the court constituted an SIT to probe the case and appointed Justice Rakesh Kumar Jain, a former judge of the Punjab and Haryana High Court, to monitor the probe. The Chief Justice further added, “State should have acted on the suggestion made by the SIT…we are not forcing you to file SLP…What is your stand?” Jethmalani said whether the vehicle mowed down the victims, intentionally or not is a matter of trial. “98 witnesses have been provided security, 78 are from Lakhimpur Kheri district…all witnesses are regularly contacted by police (telephonically). Offence is serious”, said Jethmalani.

Senior advocate Ranjit Kumar, representing Mishra, submitted that once the top court cancels his client’s bail, no court will grant him bail. The bench asked Kumar, what was the tearing hurry for his client to apply for bail? Kumar submitted that Mishra was not in the vehicle, which mowed down farmers. Senior advocate Dushyant Dave and advocate Prashant Bhushan, representing the victims’ families, said the high court failed to consider relevant facts, and the order suffered from gross non-application of mind by the high court. Dave added that none of the victims were heard by the high court. After hearing arguments, the top court reserved the order on the plea seeking cancellation of bail granted to Ashish Mishra in the case.

Mishra was arrested on October 9 last year in the case. On October 3, 2021, eight people, including four farmers, were killed in Lakhimpur Kheri in clashes during a farmers’ protest. He was granted bail on February 10.

The family members of the farmers, mowed down by a car belonging to Mishra, in Lakhimpur Kheri had moved the top court challenging bail granted to him. He is the son of Union Minister and BJP MP Ajay Kumar Mishra. The victims’ families have claimed that the state has not filed an appeal opposing bail granted to Mishra.