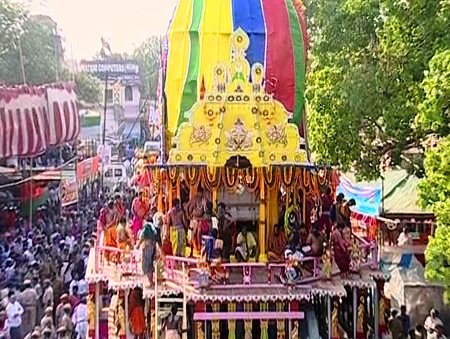 Famous Rukuna Rath Yatra, the annual chariot festival of Lord Lingaraj, began today with the pulling of chariot from the 11th century Lingaraj Temple on the occasion of Ashokasthami. The chariot began rolling towards the Mausima Temple among a sea of devotees.

Lakhs of devotees thronged to witness and participate in the annual car festival. Amid police bandobast and deployment of volunteers, the chariot was pulled.

Elaborate arrangements have been made to ensure time management and performance of rituals on time.

Odisha govt to take up nine projects for Lingaraj temple…

The rituals for the chariot pulling started last night with tying of flag atop the chariot and worshiping of the car.

The priests worshiped the car with first pot of sacred water from Marichi Kunda situated near Kedar Gouri Mandir.

Thereafter, the Mangala Alati was performed at 5 am and then temple was open for devotees from 5.30 am to 6 am for Sahanamela Darshan.

The Mahasnana was completed between 7 am to 8 am.

Elaborate security arrangements have been made to avoid any untoward situation during the Jatra.

Diabetes harder to control for people working in night shifts

Odisha +2 Sc results to be out in May 2nd week, others streams in June