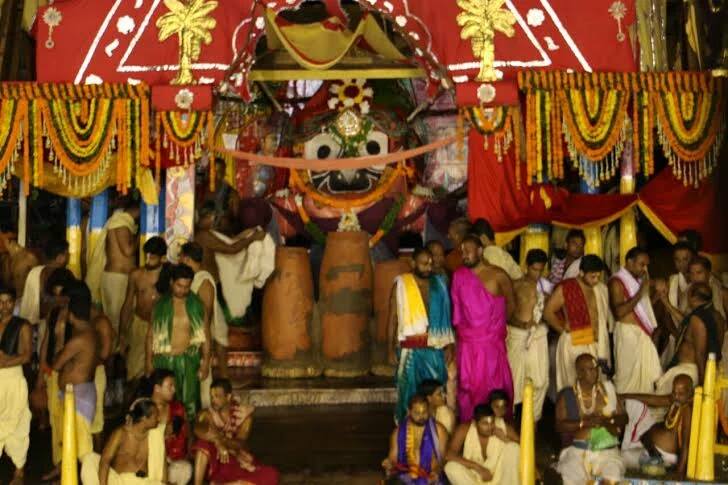 Puri: Lakhs witnessed the Adhara Pana ritual of Lord Jagannath and his siblings atop the three chariots in Odisha’s pilgrim town Puri today.

As per tradition, a sweetened drink (pana) made of milk, sugar, cheese, banana, camphor, nutmeg and black pepper among others, was offered to the Lords by the Sri Jagannath temple servitors in nine huge earthen pitchers resembling barrels measuring over a metre each in height to touch the lips (adhara) of the deities.

Three such pitchers with the drink was placed in each of the three chariots in front of the deities which were later smashed by the servitors after it was offered to the Lords on completion of the Sodasha Upachara Puja.

The pana which spills over the chariots after the breaking of the pitchers by the servitors is not meant for devotees rather it’s an offering for the parswa devatas (subsidiary deities) on the chariot and spirits etc that had accompanied the Lords on the chariots during their nine-day-long sojourn.

The annual festival of Rath Yatra will come to an end tomorrow as the Lords will return to their seats on the ‘Ratna Singhasana’(bejeweled throne) inside the sanctum sanctorum of the Sri Mandir in a ritual called ‘Niladri Bije’.

Devotees will be able to pay obeisance to the Lords inside the temple for the next 11 months until the next ‘Snana Purnima’ is held.

The Chief Administrator also requested servitors to refrain from bursting crackers inside the temple premises during the Niladri Bije ritual tomorrow as it could cause damage to the fragile monument.