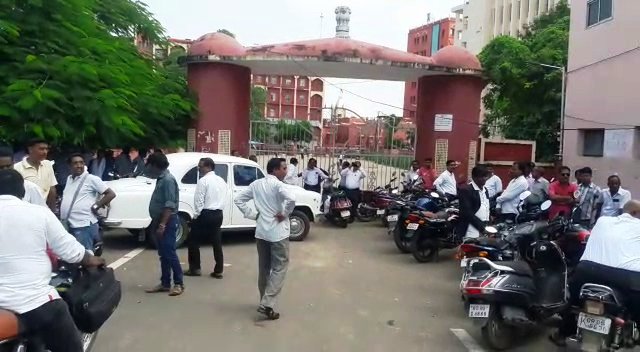 Cuttack: Functioning of all government offices here have been  paralysed as agitating lawyers staged demonstrations in front of the offices surrounding the Orissa High Court protesting the attack on a lawyer by police last month.

As part of the protest, the lawyers staged picketing in front of all the government offices, including offices of Treasury, Collector, Sub-Collector, Sub-Registrar, RDC and RTO.

Criminal Court Bar Association president AK Pati informed, “As per the decision taken at our general body meeting, we have decided to paralyse all government offices in our court periphery like the offices of Treasury, Collector, Excise, Sub-Collector’s, Sub-Registrar, State Bank of India, DRDA, RTO, Board of Revenue and RDC.”

The agitating lawyers were also seen picketing at all the four gates on the HC premises.

The protesters alleged that despite several requests, the state government has not taken any concrete steps in connection with the attack on lawyer Debi Pattnaik on  August 28. The lawyers also warned that they would gherao Naveen Niwas on Thursday to press for their demand and will be forced to take extreme step in coming days If the State government does not take any action within next few days.

Sources said schools and ambulance service have been exempted from the protest.