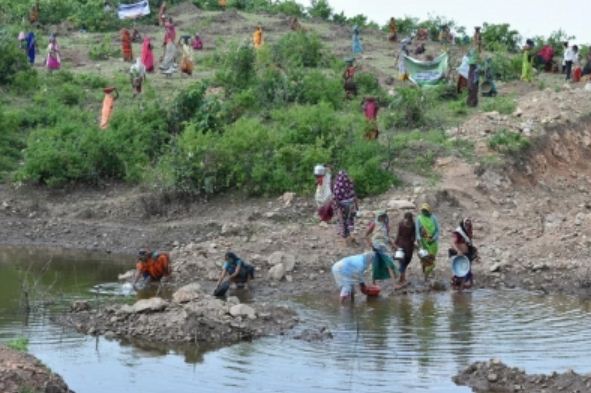 Bhopal: A group of 200 women in Madhya Pradesh’s Chhatarpur district, led by 19-year-old Babita Rajput, dug through a mountain to bring water to their parched village.

The residents of Angrotha village were struggling with a water crisis, as they were unable to get water from the river to the pond due to the hill in between. The crisis used to exacerbate during May-June.

Babita said: “The village was under severe water crisis since 2018. We planned to bring water to the pond in the village and had to struggle a lot in getting permission from the Forest Department. An NGO, Parmarth, helped us in all of this struggle. With everyone’s effort, we were able to dig through the hill and connect a waterway to the pond.”

Farmer Ramratan Rajput said: “The village witnessed rains only twice in 2020. Despite such less rains, 10 wells and five borewells didn’t dry up. There was sufficient water for farming also.”

The efforts of the 200 women were praised across the area but an official, on the condition of anonymity, said that though the waterway was created, “but it is is not true that the women have done everything”.

“JCB machine and dynamite was used to break through the hill,” he said, but admitted that the women helped in digging the trench.