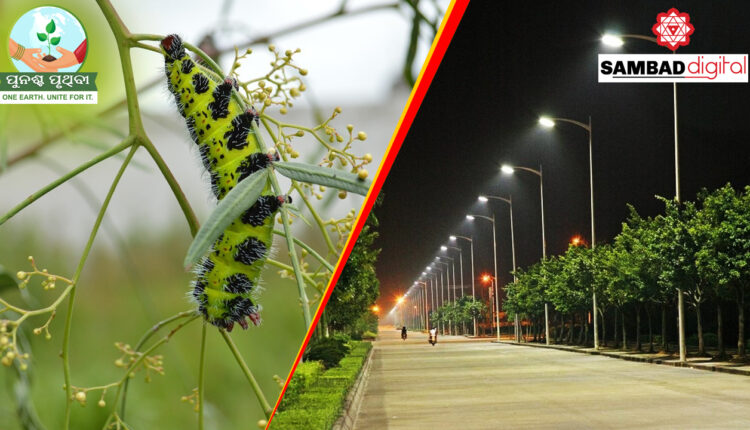 Bhubaneswar: Marked decline in insect populations in recent decades raised global concern about future functioning of ecosystem processes. The researchers are of the view that artificial light at night may be a major factor for insect loss.

According to a study published in Science Advances, the street lights disrupt behaviours of insects including nocturnal moths, reducing the number of caterpillars by about half.

There is growing evidence that the population of moths is declining in parts of Europe. Moths play a significant role for terrestrial ecosystems, including as pollinators; prey for birds, bats, spiders and social wasps and host for parasitoids. Thus, the reduction in their numbers is likely to have adverse effect on ecosystems.

The study recently carried out by researchers from the Butterfly Conservation – a British charity, Newcastle University and the UK Centre for Ecology & Hydrology found that the artificial lighting is a threat to biodiversity and ecosystem processes reducing moth caterpillars’ abundance compared with unlit sites (47% reduction in hedgerows and 33% reduction in grass margins).

The study was conducted on caterpillars on stretches of grassland and hedgerows at the sides of roads in southern England. The researchers used two sampling methods: hedgerow beating during the day and night time sweep netting of grass margins. Their hypothesis was that caterpillar numbers would be lower on lit transects because of the multitude of negative impacts of street lights. Separately, they installed LED and HPS (high-pressure sodium) experimental lighting rigs in field margins to test the hypothesis that street lights would disrupt the feeding behavior of nocturnal caterpillars.

The results showed that caterpillar abundance was substantially lower in habitat areas illuminated by street lights. There were fewer caterpillars in lit hedgerows at all sites (overall effect on abundance was −47%, −52% for LED transects, and −41% for HPS).

On the other hand, there were fewer caterpillars in grass margins on transects at almost all sites (overall effect on abundance was −33%, −43% for LED; nonsignificant effects of −24% for HPS and −11% for LPS (low-pressure sodium) technology.

In a separate experiment, the researchers installed lighting rigs along homogeneous, previously unlit grass field margins one hour before sunset. They found decline in number of caterpillars under LED lights that affect feeding behaviour of insects.

Though several studies have highlighted the impacts of artificial lights on insect pollination, it is yet unclear whether the effects of street lights are predominately disruptive impacts the behavior of individuals or it is actively diminishing the populations of pollinators and insect populations more broadly.

Note: This story is a part of ‘Punascha Pruthibi – One Earth. Unite for It’, an awareness campaign by Sambad Digital.