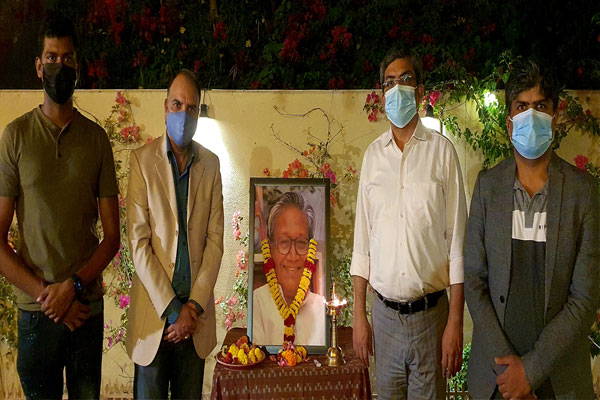 Bhubaneswar/Dubai: Eminent Odia and English litterateur late Manoj Das was paid rich tributes in Dubai by a group of Non-Resident Odias currently residing there on Thursday.

At the outset a lamp was lit in front of Manoj Das’ photograph and floral tributes were paid. Then the attendees spoke about Manoj Das’ life and times and his literary accomplishments. A special book reading session was also organized in the meeting.

Speaker after speaker eulogized Manoj’s contribution to Odia and English literature. They talked about his simple and down-to-earth demeanour and magnetic personality and also about how he single-handedly raised the bars of Odia language and literature.

Tributes were led by Capt. Soumyaranjan Patnaik who said that despite the pandemic, the small commemoration was organised as it was important to remember the legend and pay him tributes.

Priyadarshee Panigrahi then said ‘Shri Das was probably the best loved author in Odia and a significant writer in English who was praised by one of leading British novelists of the 20th Century Graham Greene and India’s much loved author Ruskin Bond’.

One of the highlights of the evening was the recitation of Prashant Meher’s specially composed poem in the memories of Manoj Das. It was a poignant one which talked about Shri Das’ departure and his immortal legacy and body of work.

Shops across Odisha to be closed after 2 PM