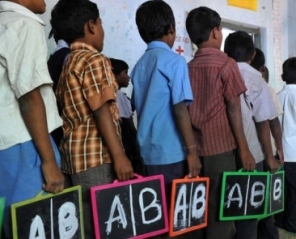 A language has the power both to unite and divide masses, depending on what we allow it to do. This was aptly understood and implemented in India at the time of her Independence, when her states were reorganised on linguistic basis.

Enmeshed in hundreds of languages causing unity and division within her, even after 67 years of Independence, India still struggles hard to christen one of her languages as her ‘National Language’ – to represent the unique identity of her people at a global platform.

At this juncture of the 21st century, this seems to be the imperative need of the hour. The recent circular issued by the Narendra Modi Government asking for the usage of Hindi by government officials in social media accounts has further sparked off this debate.

Now arises the million-dollar question as to which language deserves to be crowned as India’s National Language. To begin with, Sanskrit, the lingua franca of ancient India, was used and revered all over the country centuries ago.

However, it is a matter of utter shame that such a great language had to be ‘discovered’ in the 1780s by Sir William Jones (as Westerners describe it) to the occidental world and expounded its virtues and perfections. Assuming that now not much can be done to restore Sanskrit to its pristine glory, the least we can do is to save the extant lingua franca that is Hindi from meeting a similar fate.

Then coming to see the overwhelming use of English in India since British rule, should we keep on revering and using a Western language like English, when it were those very Westerners who dubbed India as a Third World country? Many celebrated Indians including Amitabh Bachchan have openly voiced their discontent against India being called as a Third World country.

So should we still adopt and increasingly use a foreign language like English which is native to Westerners, just because we cannot arrive at a consensus to choose one of our own indigenous languages as our ‘National Language’ and bow down before it with respect, just as we are expected to do, to the National Flag and the National Anthem, as our fundamental duty under Article 51A of our Constitution?

In this modern era where everything under the sun is anglicized, hope we Indians do not lose our own distinct identity while pursuing our craziness for English, in order to go global. Of course, the love for change in we Indians isn’t going to die, especially when it comes to emulating the West. But can we forget our own roots for the sake of change?

The Constituent Assembly while arriving at the crisis-saving Munshi-Iyengar Formula agreed to treat Hindi as the ‘official language’ of the Union. However, in the Constitution, Hindi remains an ‘official language’ (Rajbhasha) and is yet to be accorded the status of India’s ‘National Language’ (Rashtrabhasha), fearing divisive tendencies even before Independence.

Looking at the constitutional provisions, Article 343 mandates that the official language of the Union shall be Hindi. The Constituent Assembly clearly intended for the steady increase of Hindi instead of English as can clearly be deciphered from Article 120 (2). So the circular issued by the Modi government did nothing new, but was following an already existing constitutional directive under Article 351.

In a democracy, it all ultimately boils down to majority. A party rules if it gets majority. A Bill is passed only by majority. So language isn’t an exception. Going by that logic, since it is Hindi which is spoken by the majority, it should grab the cake as the National Language. Saying so, I do not mean that Hindi is the best and most superior among all Indian languages. In fact, I myself come from a non-Hindi speaking state, and neither is Hindi my mother tongue.

In fact, it is needless to spark off a debate as to which would be the best Indian language to represent us worldwide. That is because every such language is the mother tongue of a certain class of Indians. And for every Indian, his mother tongue is the best one for him and with due respect to all other women, howsoever beautiful they may be, he shall bow down only before his own mother. So did J. Jayalalitha, M. Karunanidhi and so will many other Indians, as expected.

It is usually seen, that when it comes to choosing Hindi, the ones who revolt taking the plea that it would amount to imposing a language just for the sake of unity of the nation, are usually politicians with vested interests who know saying this will fetch them more votes. But when such remarks come from politicians, and the media hypes them while reporting, the commoners tend to believe them. Commoners who are poor, illiterate and live in rural areas readily believe such remarks, being unable to rationally and critically analyse their repercussions.

I was sitting at a popular food joint in my hometown, and the moment the sales manager saw a couple of foreigners entering, he immediately switched over from Bollywood songs to English pop music, with a clear view to appease them.

At that time, I glanced at my laptop which I was working on. It contained a ‘Made in China’ in bold capital letters while most of the label apart from it was written in Mandarin, when the Chinese know that such product is most likely to be exported and sold out to any customer in any part of the world who can hardly be expected to read or understand Mandarin!

However, one buys any product of the Indian snacks giant Haldiram’s, one can find English and even French on the glossy packet, but not a single letter in Hindi or any other Indian language! Doesn’t it speak volumes about the difference between the Indian and the Chinese psyche, or need I give more such illustrations?

Here the question that arises is that if not Hindi, which other Indian language can be a better substitute. It certainly cannot be Tamil, Bengali, or any other language, for none of them are spoken as widely as Hindi is. For example, if Tamil is declared to be the National Language tomorrow, then most of chief ministers will oppose and there will be many Jayalalithaas to staunchly oppose such a proposal. The same holds good for any other Indian language. So isn’t it better to choose Hindi and have fewest opponents? Or should we Indians continue like this, having no language as our ‘National Language’, just because we are busy showing off our so-called ‘passion’ for our own respective mother tongues?

Hindi should be the most convenient choice, as statistically speaking, it would amount to ‘imposition’ on the minimum number of populace. If the trouble lies in such ‘imposition’ alone, then the solution to that would be to engage in persuasive encouragement of Hindi, and then leave it open for the individual to accept it out of his own volition. Non-knowledge of the National Language by some citizens cannot be considered as shameful, far from such citizens being considered as ‘second-class citizens.’

The use of any language that is most widely spoken ought to be encouraged to represent our quintessential Indianness,  as our ‘National Language’. Be it Tamil, Odia, Marathi, Hindi or whatever else, whichever is the most widely spoken.

Going by statistics, since Hindi it is, then so be it!
………………………..
*Navneeta Dash has studied law in Government Law College, Mumbai and is currently practicing in the Orissa High Court at Cuttack

Modi not to attend FIFA final