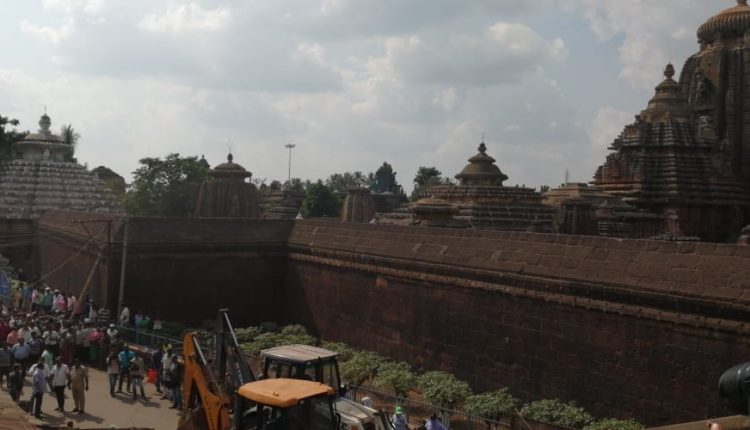 “The owners of shops, which have been razed to ground will be rehabilitated. The drainage and street lights will be improved. The roads will be kept clean and the Bhajan Mandap that has been demolished will be renovated. The shop owners, who have lost their livelihoods due to eviction drive, will get financial assistance for one year,” said Congress MLA Suresh Kumar Routray after meeting with BMC Commissioner in Bhubaneswar.

The state government has already estimated for the developmental project. It will be announced shortly following approval of Chief Minister Naveen Patnaik.

Official source said that eviction drive around the Lingaraj Temple will continue as per the plan. Some offices will be shifted to other location and new roads will be built for better connectivity.

Reliable source said that the heavy vehicles enroute to Lingaraj Temple will enter to the site from Samantarapur and will be parked near a parking place proposed to be built at New Lingaraj Market. Following holy darshan of Lord Lingaraj, the tourists will leave via Garage Square.

The stretch from Bindu Sagar to Lingaraj Temple will be declared as no-vehicle zone. As operation of vehicles will be strictly banned, the tourists will have walk the long stretch to reach destination. However, the administration will make arrangement to ply battery operated vehicles on this route for the tourists.

In view of possible inconveniences to be occurred for the locals due to restriction on plying of vehicles adjacent to Lingaraj Temple, the government is considering to make a few roads as one-way for which new roads are in the plan.

The administration will acquire private land, if necessary, for widening of the roads. Also, the illegal hoardings will be removed for clear visibility of the centuries old shrine.

Meanwhile, the government is planning to shift Lingaraj Temple Police Station and Temple Office situated in front of Lingaraj Temple and to build sitting place and toilets for the tourists on the vacant place.

All the structures in front of Lingaraj Temple will be evicted. The police station will be temporarily shifted to Dakshin Chandi Kalyan Mandap and the Lingaraj Temple office will be relocated to a building near Lingaraj market, a reliable source said.

To ensure smooth darshan, a special barricade system will be made at the temple. Infrastructure will be developed for entry of persons with disabilities into the shrine, the source said.

Moreover, the existing road behind the temple will be renovated by widening it upto Keuta Sahi Chhak via road in front of BMC Hospital and BMC High School playground.

A public plaza will be constructed for amusement of tourists at the site of old Lingaraj market complex, which has been evicted in the demolition drive.

No vehicle will be allowed to park in front of the temple. However, the locals residing near the temple will be given a special pass for plying their vehicles.

Source said that the administration has already identified the houses to be demolished in the beautification project and the government will announce the compensation amount for the house owners.

Similarly, no vehicle will be allowed on the road in front of Ananta Basudeva Temple. The devotees can enter into the shrine after parking their vehicles at new Lingaraj market complex.

Paya Shraddha rituals on Diwali not allowed at Lingaraj in…