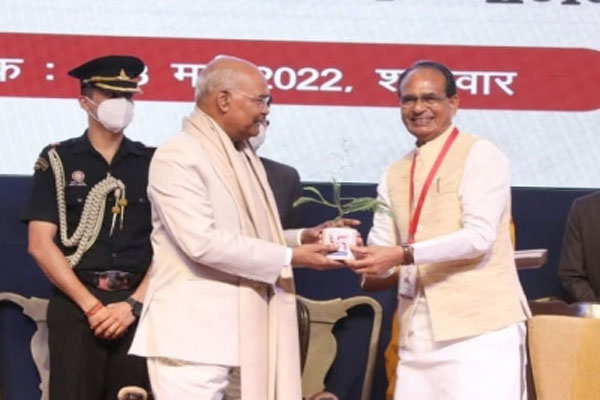 Bhopal: President Ram Nath Kovind on Saturday said that associating Ayurveda and Yoga with a particular religion or community is “unfortunate”.

President Kovind made the observation while inaugurating Arogya Manthan programme “One -Nation One Health System’ organised by ‘Arogya Bharti’.

The President hailed Arogya Bharti for working in an organised manner with a holistic approach of making citizens healthy. He praised the institution for expanding its activities at the national level.

The President said that under the National Health Policy announced in the year 2017, the government aims to make quality health services accessible to all at an affordable cost. “It is also the aim of this policy to arrange health facilities for all in a comprehensive and holistic manner,” he added.

He further said that to achieve these goals, the cooperation of all sections of society, especially the aware citizens, along with the participation of government and private sector institutions is essential.

The President’s three-day visit to Madhya Pradesh began on Friday evening with his arrival to the state capital Bhopal. He was accorded a grand welcome by Chief Minister Shivraj Singh Chouhan and Governor Mangubhai Patel.

On Saturday, he will be performing bhoomi-pujan of 10 urban health institution buildings, costing Rs 154 crore, and dedicate newly constructed buildings of four health institutions, costing Rs 72 crore, at Motilal Nehru Stadium. He will also perform bhoomi-pujan of the 182-beded Regional Institute of Respiratory Diseases which is being built at a cost of Rs 55 crore.

He will go to Ujjain to take part in ‘Ayurveda Mahasammelan’ and offer prayers at the Lord Mahakaleshwar Temple on Sunday and return to Delhi via Indore the same day.