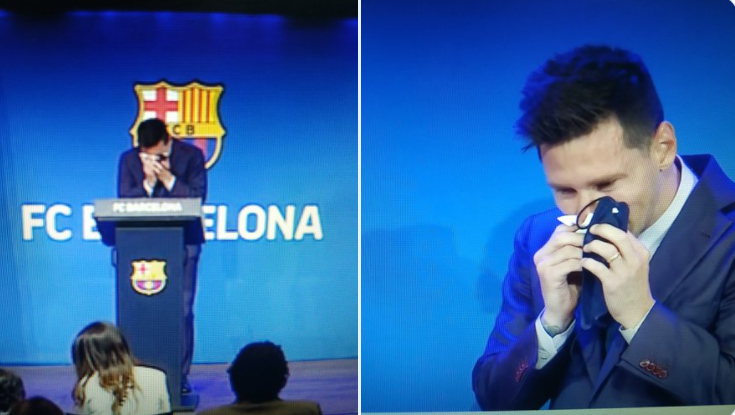 Bhubaneswar: Football legend Lionel Messi broke down in tears when he addressed a press conference to confirm his departure from FC Barcelona after 21 years.

“The truth is I don’t want to say it, these recent days I’ve been thinking about what I could say, and the truth is that I can’t think of anything,” Messi said. “This is really difficult for me after so many years, being here my entire life. I’m not ready for this.”

Amid his tearful goodbyes, Messi’s wife Antonela Rocuzzo handed him a tissue to wipe his tears. Following the press conference, Messi threw the tissue in a bin. It was subsequently collected by an anonymous person who put it up for auction on a website named Meikeduo. The tissue has been priced at a whopping $1 million.

The advertisement is still online meaning that the tissue has not been sold yet. The caption describes the tissue containing Messi’s ‘genetic material’. Potential buyers can therefore clone another footballer just like Messi.

Messi moved from Barcelona to French club Paris Saint-Germain on a two-year deal with an option of a third year.

Messi is the latest of the big-name arrivals at PSG on a free transfer this summer after coach Mauricio Pochettino’s side snapped up Spanish defender Sergio Ramos after he left Real Madrid. Dutch midfielder Georginio Wijnaldum also joined from Liverpool.

Delhi receives highest rainfall in over a decade: IMD