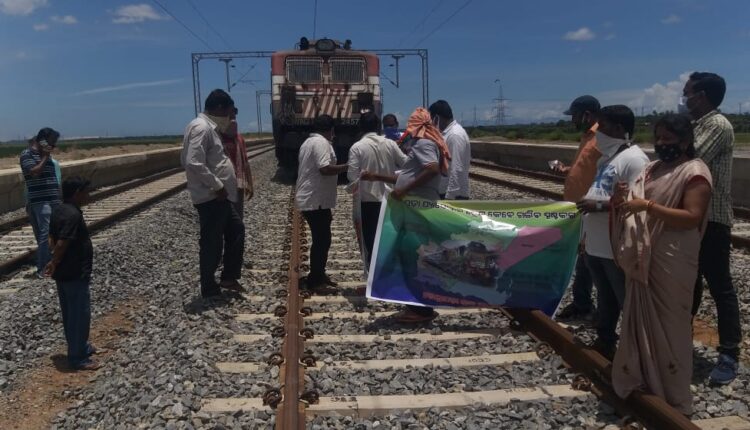 Paradip: Trial run of a goods train on the new Paradip-Haridaspur railway line in Odisha faced opposition on Friday by locals who demanded immediate start of passenger train services on the route, police said.

Residents of several villages blocked the tracks and halted a Rourkela-bound coal-laden goods train from Paradip at Nuagaon in Kendrapara district to press for their demand, police said.

Several people from the area, including local elected representatives, stopped the goods train and staged a sit-in, railway sources said.

The blockade was lifted after a couple of hours following talks with the protesters who were given an
assurance that their demand would be forwarded to the authorities concerned for appropriate action, a railway official said.

The goods train resumed its onward journey soon after the agitators withdrew their stir and cleared the tracks, he said.

The protest comes two days after Union Petroleum and Steel Minister Dharmendra Pradhan in a letter to Railway Minister Piyush Goyal on Wednesday urged him to ensure the presence of Prime Minister Narendra Modi and Odisha Chief Minister Naveen Patnaik for the formal inauguration of the 82-km rail link on a suitable date.

The chief minister had requested the railway minister to take steps for running of passenger trains on the route at the earliest, preferably in August, to meet the aspirations of the people of the region.

Paradip-Haridaspur railway line project was sanctioned in 1996 and its foundation stone was laid in 1999. However, the completion of the project was delayed by almost two decades. PTI