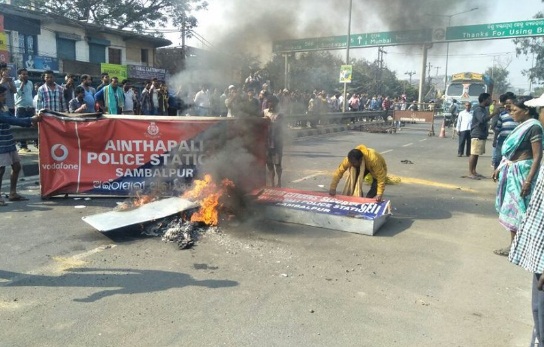 Sambalpur: Ainthapali police station in Odisha’s Sambalpur district was today ransacked and set on fire by hundreds of irate locals including women over the custodial death of a person accused in a theft case.

The cops at the police station, who were very less in number in comparison to the locals, became helpless during the untoward incident.

Holding iron rods and sticks, the mob damaged articles at the police station, vandalized several vehicles and attacked policemen by pelting stones at them besides torching the police station. As many as seven cops have reportedly sustained injuries in the attack.

Furniture, documents and many vehicles parked on the police station were also set on fire by them. The locals were also seen manhandling police officials of the station.

On being informed, Sambalpur SP Sanjeev Arora and police force reached the spot and initiated efforts to take the situation under control. Police resorted to lathi charge to disperse the mob.

Vehicular movement on Kolkata-Mumbai road passing close to the Ainthapali police station was affected due to the protest by locals.

Fire tenders reached the spot to douse the flames amid police security as locals opposed the arrival of fire personnel.