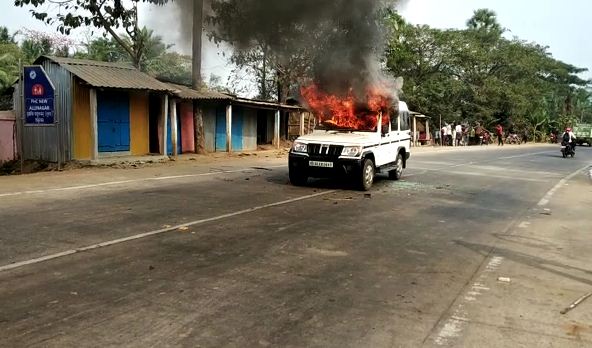 Bhadrak: Tension ran high at Alinagar Chhak under Tihidi police limits in Odisha’s Bhadrak district today as locals set a police van on fire over the death of a detainee.

According to reports, one Bapi Mahalik of Hatuari village under Nayanand panchayat was detained by police for questioning in connection with an offence. However, his body was later found floating in a pond in the village.

Family members of the deceased alleged that he jumped into the water body after being tortured by the cops.

Irate locals torched a vehicle in which cops had come to the locality. They also blocked Bhadrak-Chandbali road at Alinagar by placing the body on road.

COVID vaccination: Covaxin for Bhubaneswar, Covishield for rest in Odisha