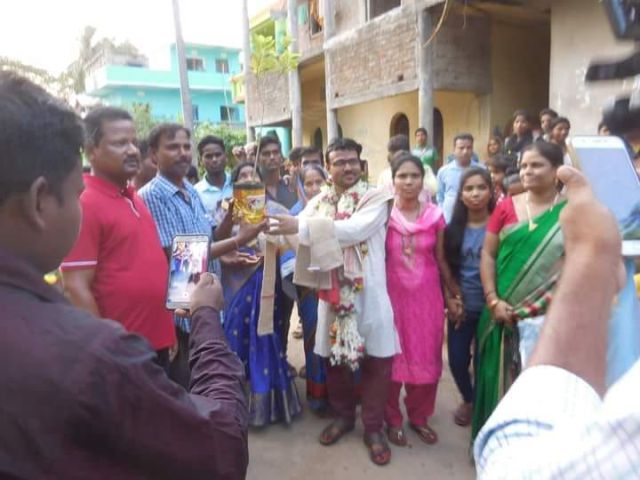 Kendrapara: A youth defined the concept of an ‘ideal marriage’ after tying the knot with a girl receiving some saplings from the bride’s family as ‘dowry’ here in Odisha’s Kendrapara district.

There was neither DJ, dance, song and fireworks nor the decorated vehicle or horse during the marriage procession. Even, the groom did not demand anything from the bride’s family as the dowry, but walked for 2.50 km towards the wedding venue to start second innings of his life.

Get sapling free on purchase of new vehicles in Odisha capital

The ideal marriage took place at Balabhadrapur village under Pattamundai block in Kendrapara district where the groom identified as Saroj Biswal, a science teacher at Chaudakulat High School, set an example for others against the evil social system like dowry.

Biswal married to Rashmi Rekha, the youngest daughter of Maheswar Paital, a resident of Adampur village in Marshaghai area on Saturday without spending money on marriage procession. The bride is a Sanskrit teacher posted at Nischintakoili High School in Cuttack district.

Saroj in groom attire took a round entire village along with his relatives and friends and walked around 2.50 km to the bride’s home. The groom’s family demanded 1500 saplings of fruit bearing trees as dowry and distributed two saplings to each house at the bride’s village to make the wedding memorable.

The groom’s reception will take place tonight at his village where the invited guests will be presented saplings as gift from their side.

In the invitation card, the groom’s family mentioned that there will be no use of plastic items during the reception. Only, the items made of papers will be used during the function.

“The wedding will give a clear message to the society that is degrading and filled in evils like dowry and unnecessary expenses in name of marriage,” said Saroj’s uncle Sudarshan Biswal.

“I am happy that my daughter married such a person, who directly denied to take dowry,” said bride’s father Maheswar Paital.

One kg gold seized at airport in Odisha capital

Man beats wife to death over dowry in Odisha’s…