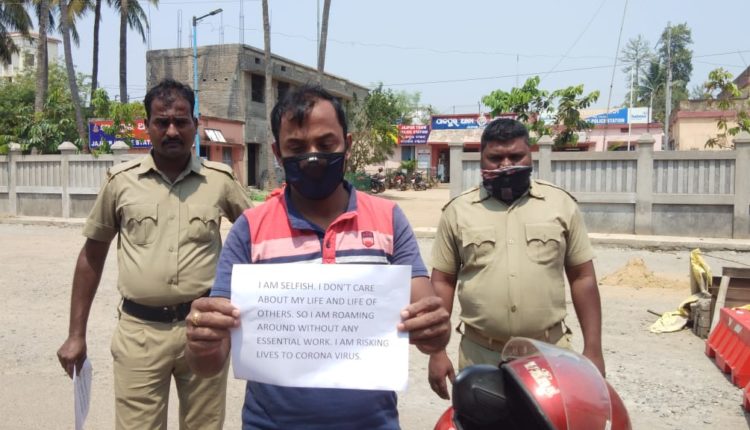 Bhubaneswar/Jajpur: As the nationwide lockdown has been imposed to tackle the spread of deadly coronavirus (COVID-19), Prime Minister Narendra Modi and Odisha Chief Minister Naveen Patrinak requested people with folded-hands to stay home. But it was observed in several places that lockdown violators were strolling on roads or riding motorcycles without any purpose.

To deter and punish such violators, the Jajpur Additional Tahsildar thought of an idea instead of just imposing fine or reprimanding them.

Today, police and local administration in Jajpur caught the lockdown violators and clicked their photos with placards saying “I am selfish and do not care for the lives of others. I am risking lives to coronavirus.”

Later the administration released the photos on WhatsApp groups to shame the lockdown violators.

A local said definitely this move of the Jajpur Additional Tahsildar is laudable. Actually it looks like the lockdown violators do not care for themselves, their families and society, he added. 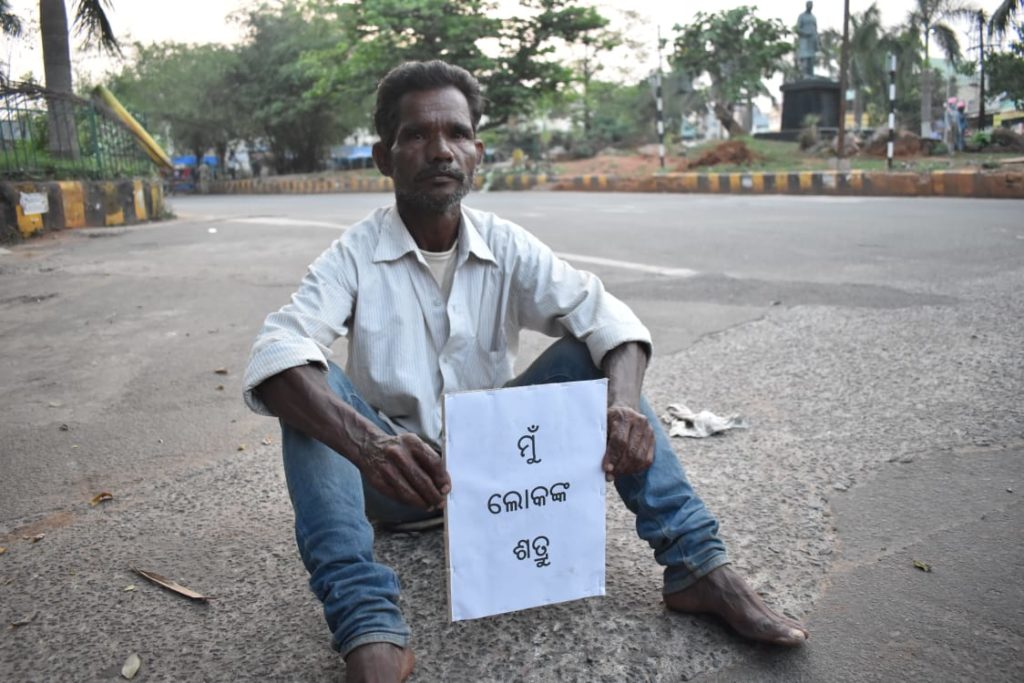 Similar action was also taken against the violators in some parts of Bhubaneswar as well.

As many as 1,200 police personnel are patrolling the streets of Bhubaneswar to ensure that people do not venture out unnecessarily.

Those found loitering around are being made to do sit-ups, a senior officer said.

In Kandhamal district, two youths, who were nabbed for roaming the streets, were made to hold placards that had ”selfish” and ”irresponsible” written on them.

At least eleven people have been arrested in Phulbani area of the district for opening shops to sell non-essential items, another officer said.

In Sambalpur, four persons were booked under section 188 of the IPC (disobedience to order) and also the Motor Vehicles Act.

In Cuttack and Balasore, too, similar measures have been taken to stop residents from coming out on the streets.

A district official in Puri said all places of tourist interest, including Shree Jagannath Temple, have been barricaded to dissuade people from visiting those sites.

At least, twenty teams of police officers are patrolling the seaside town and generating awareness on the disease, he said.

“Barring some, most people are adhering to the rules. We have so far seized 30 vehicles. Some grocery shops that were seen flouting the social distancing norms have also been warned,” Puri Superintendent of Police U S Dash said.

A hotel has been sealed in the district as its owner did not inform police that it was still hosting three foreigners, he said.

Three other hotels in Puri have offered their properties for setting up quarantine camps, the SP said.