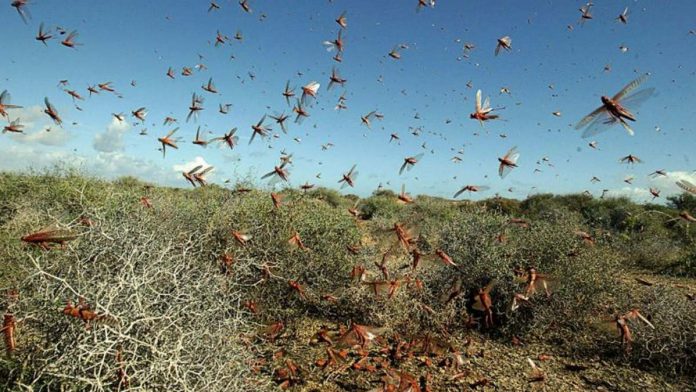 Bhubaneswar: Locusts are likely to reach Odisha in July as predicted by the Food and Agriculture Organization (FAO) of the United Nations, said Agriculture Director M Muthukumar today.

Probability regarding the arrival of locusts in the state can be ascertained in 4-5 days, he said, adding that movement of locusts in Madhya Pradesh has weakened due to control measures.

As per FAO, locusts that arrive in advance of the monsoon rains are likely to settle in cropping areas or continue eastwards to Madhya Pradesh, Uttar Pradesh, Maharashtra, Chhattisgarh and perhaps as far east as Bihar and Odisha. The locusts in the central northern states will oscillate east and westwards before returning to Rajasthan with the onset of the monsoon in early July. Swarm mobility will decline as they mature and lay eggs in Rajasthan. Early breeding could produce hopper bands by the end of the forecast period.

Chances of locust attack are high in Nabarangpur, Nuapada, Kalahandi, Malkangiri, Koraput, Rayagada, Jharsuguda, Sundargarh and Bargarh districts of Odisha, an official of the state government had said.

One more tests positive for COVID-19 in Bhubaneswar