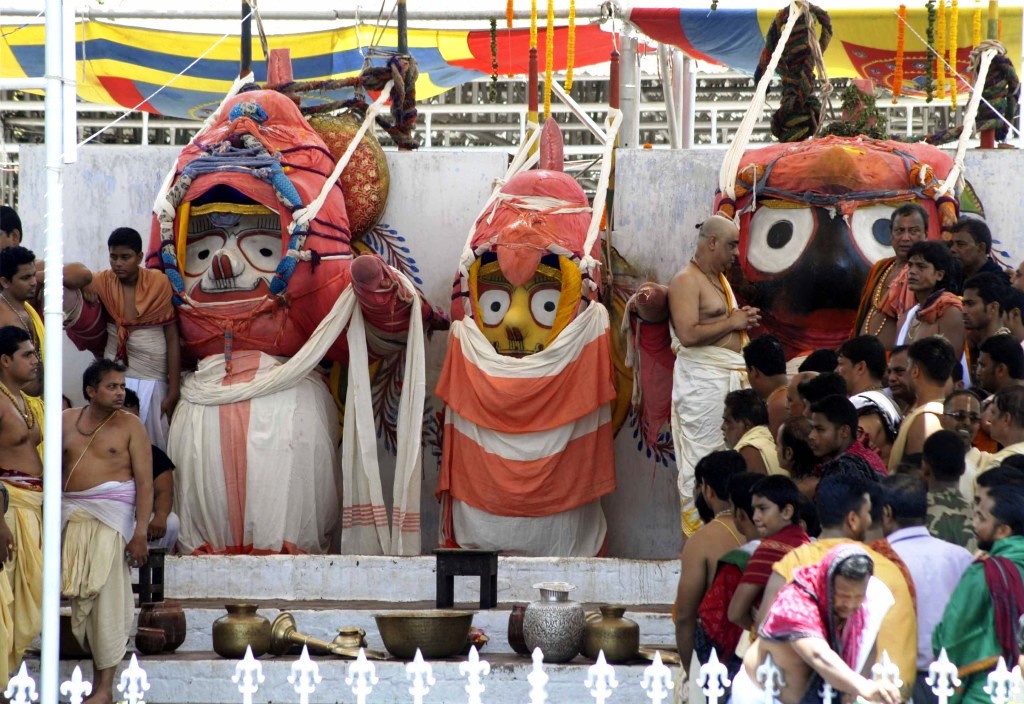 The deities took shower with 108 pots of holy water blended with Chandan (sandal), Jaba (whole rice), Haridra, flowers, Aguru, Benachara, aromatic herbs and perfumes on the Snana Mandap, situated to the north-east of Ananda Bazar, followed by all the rituals by the servitors and priests.

In the morning, the lords were brought out from Ratna Bedi (inner sanctum of the temple) to the Snana Mandap at around 8 am in a traditional procession, called Pahandi. The Bada Pandas (priests) performed Mangal Arati at the Snana Mandap. The deities were decorated with flowers and garland of Tulasi (holy basil). The Suaras and Mahasuaras (servitors) moved in a ceremonial procession for bringing 108 pots of water from Suna Kua (Golden Well). The mouth of the servitors was covered with a piece of cloth while bringing the water from the well so that the water will not come across their breath. The pots were placed at the Bhoga Mandap, where the priests purify the water with aromatic herbs, flowers by chanting the mantras. Later, the pots were carried to the Snana Mandap by the Suaras in a single queue.

The Jalabhisheka ritual (bathing ceremony of lords) was accompanied by chanting of vedic mantras by the priests at around 2.20 pm. While the servitors poured 35 pots of water on Lord Jagannath, Lord Balabhadra had shower with 33 pots of water, Devi Subhadra with 22 pots of water and Lord Sudarshan took bath with 18 pots of water. The devotees witnessing the sight were performing kirtanas, beating of various music instruments including jhanja (cymbal), mrudanga, turi, and blowing the conch shells outside the boundary wall.

After taking shower with 108 pots of water during scorching summer, the deities are supposed to fall sick. The idols will be kept in another place inside the temple instead of placing them on pedestal. The devotees will not get darshan of the lords in the temple for a period of 15 days. The period is called Anasara.

All the rituals were performed within scheduled period in a peaceful manner, as committed by the servitors
group during the Rath Yatra Coordination Committee meeting convened by Puri district collector last week.

Jagatguru Shankaracharya Nischalananda Saraswati of Gobardhan Pitha in Puri remained absent as he is out of the State on the occasion to have glimpse of lords on the Snana Mandap.

The Snana Purnima festival was held amidst tight security. In view of the large footfall of devotees for the grand festival wherein devotees have a chance to have a close darshan of the Lords, elaborate security arrangements have been made by the district administration to maintain law and order and ensure smooth passage of the darshan. For surveillance purpose, CCTV cameras have been installed at the Snana Mandap. Barricades have been erected in front of the Lions Gate of the Sri Mandir for the smooth darshan of the Lords atop Snana Mandap by the devotees.

Low pressure likely to trigger rainfall in Odisha till June 14