I love celebration of melody in songs: Sadhana Sargam

ENTERTAINMENT
By Sourabha On Jan 7, 2017 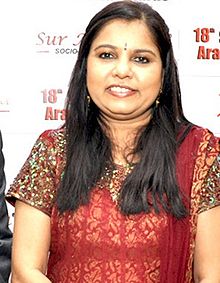 Singer Sadhana Sargam, who has worked in Bollywood and other regional film industries, says she enjoys melodious songs, adding that film music has changed a lot.

Considering the fact that she does not sing in Bollywood so often and asked if she has any preferences, Sargam said she loves songs that have strong melody.

“The music has changed (in film music) and there are various genres that we get to hear now. I love songs that have strong melody. Unless I am getting that, how could I sing? But new singers are also talented and they fit in to the trend. As a singer I love the celebration of melody in songs,” Sargam told IANS.

The singer, who is currently busy preparing a list of songs for a concert titled “Roshan Se Roshan Tak”, said that it is quite a task to choose a few from a long list of super hit songs of Rajesh Roshan that she sang all through her career.

With a combination of young and veteran singers and a 50 piece orchestra, music director Rajesh Roshan is holding the concert in Thane and Vadodara on January 28 and February 11 respectively to commemorate the journey of three generations of his family.

Sargam feels “one of the special factors of song recording earlier was rehearsal that helped me to pick up many nuances of playback singing, especially expression”.

Starting her musical journey at the very tender age of four under the tutelage of her mother Neela Ghanekar, a classical singer, Sargam lent her voice for popular song “Sooraj ek chanda ek tare anek” for Doordarshan at the age of six. She has explored all the platforms — be it films, television or pop album.

Talking about the popularity of her song “Jab koi baat bigad jaye” from the film “Jurm”, composed by Rajesh Roshan, Sargam said: “As a singer, I treated all the songs with equal passion but I had no idea that it would be such a hit song! I think though it is an old song, people can still relate with it.”

Dhoni made players feel they can be world-beaters