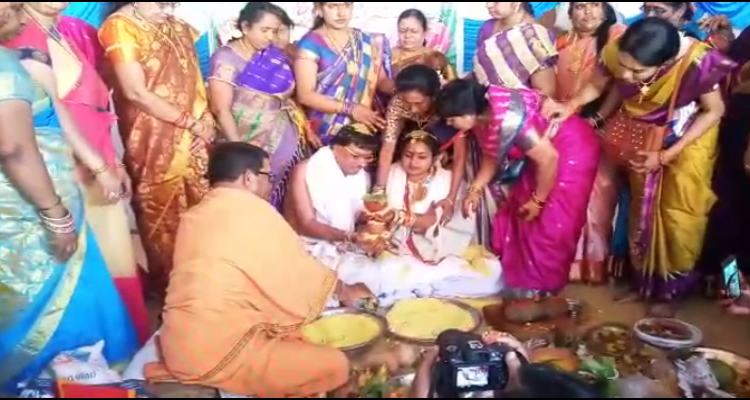 Berhampur:  Visually-challenged Soumya of Radhakrusha Sahi in Gatebazar here had little hope that she will marry someday just like any other girl. But as we say marriages are made  in heaven, Soumya  finally became a ‘happy’ bride  when she got married to one Madan Mohan of Tirupati in Andhra Pradesh on Sunday.

The couple tied the knot with all the rituals at  a Kalyan Mandap here in the presence of families and friends from both sides.

The bride’s father GLN Swami Sekhar has three children. Soumya, the youngest one, lost her vision at the age of 14 after suffering from cerebral malaria. Though her father made all possible efforts for her treatment,  Soumya lost her vision completely. Sekhar used to remain  stressed thinking about his daughter’s future. However, fate had something good in its store for Soumya. A relative of Sekhar from Vijaynagram had once discussed about a marriage proposal of the former’s daughter with Madan, son of one G Venkat Simadri of Tirupati.

Despite knowing about Soumya’s  inability, Madan, who works in the canteen of Tirumala temple, agreed to marry her. With consent of both of  their family members, the two got married in a pompous way. Everyone present at the wedding ceremony blessed the happy couple.

Madan has set an example for many not only by marrying a visually-challenged girl but also accepting her without any dowry.

45 fast-track courts to deal with sexual offences in Odisha