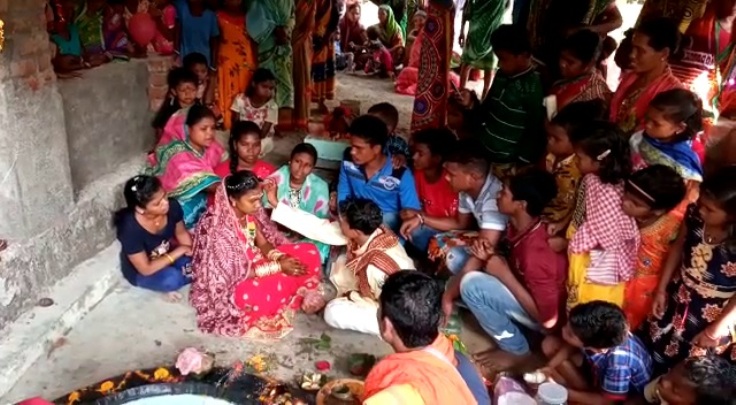 Angul: In another instance of love that can mould anyone to choose right path, two ultras joined the mainstream giving up guns and tied the knot in Odisha.

The rare incident was reported from Tikarpada area in Angul district where a young couple Jolly Dehury (19) and Chhotu Ganju (26), cadres of Sambalpur-Deogarh-Sundargarh Division of CPI (Maoist), preferred to start a new life together leaving the path of violence.

According to reports, Jolly Dehury had joined the Maoist camp after coming in contact with a red rebel group in Tikarpada in the year 2018. During training, she fell in love with another cadre Chhotu Ganju, a resident of Jharkhand. However, the Maoists did not approve their relationship.

The couple, who had left their houses for a cause, craved for a new start of life. They decided to leave the organisation to make their love to happen.

Jolly and Chhotu ran away from the camp and surrendered before the police in Angul. While Jolly went back to her home at Majhipada village in Tikarpada panchayat, her beloved stayed in Angul following surrender. Later, they tied the knot at Champeswar temple at bride’s village as per Hindu customs on Wednesday.

Hundreds of villagers witnessed their marriage and blessed the newlywed couple for their new life.

ISRO postpones Cartosat-3 and 13 US satellites to Nov 27