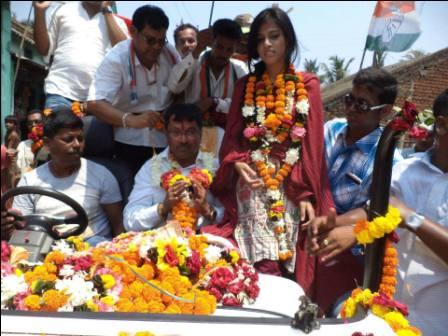 Bhubaneswar: Lulu Sena – a youth brigade owing allegiance to firebrand Congress leader Lalatendu Bidyadhar Mohapatra – is in all likelihood going to lose it might as most of its prominent leaders are set to join the Bharatiya Janata Party (BJP) in Odisha.

The departed leader’s brother and daughter are among those who are set to join the saffron party at a special function to be held in the capital city on October 12, sources privy to the development said.

The merger comes 11 months after the demise of the senior Congress leader and less than 20 months of its inception.

The ever-depleting strength of the state unit Congress contributing to existential crisis is said to be the driving factor for members of the outfit jumping ships. The outfit set up in the name of Lalatendu Bidyadhar Mohapatra aka Lulu Mohapatra was a formidable force to reckon with not only in Mohapatra’s home turf Brahmagiri but also in several other parts of the state.

With the kin of the senior Congressman joining the national party, the move will deal a massive blow to the grand old party’s fortunes in the upcoming elections.

Political pundits had sniffed it rightly post a function here last month where Lulu’s only daughter Upasana felicitated Union Petroleum and Natural Gas Minister Dharmendra Pradhan and senior BJP leader Biswabhusan Harichandan as a gratitude towards celebrating the bicentenary of Paika rebellion in a big way – in state as well as national level.

It was speculated then that the Mohapatra scion would be joining the BJP before long.

If I would ever venture into politics, then it would be with my uncle Dharmendra Pradhan. He has done a lot for us, Upasana had told media a month ago.

Likewise, Lulu’s younger brother Lalitendu Mohapatra said that they are in talks with the members of Lulu Sena on joining hands with BJP. If everything works out well then we would go with the majority decision.

It seemed Upasana would inherit her father’s legacy and set her foot into politics as a natural transition especially after Leader of Opposition in state assembly Narasingh Mishra, former OPCC chief Niranjan Mishra and other senior leader met her at the official residence to express their grief with the bereaved family. Much to the chagrin of the Congress, the Lulu Sena members have sprung a surprise for the state leadership.

It may be recalled there that Congress had fared badly in the last year’s three-tier panchayat elections results of which gave enough ammo to the state leaders to gun for Odisha Pradesh Congress Committee president Prasad Harichandan’s head.

A section of the party grappling with infighting has been petitioning to AICC vice president Rahul Gandhi on numerous occasions for change of guards to get its mojo back, but in vain as the inevitable is yet to get the sanction.

Durga pandals in Odisha to donate for treatment of Jaga-Balia