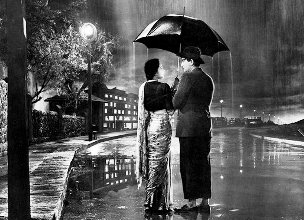 After flooding villages and inundating cities in the last couple of months, another rainy season is on its way out. A few more weeks and its marvel, magnificence and menace will become moist memories of one more monsoon. But thanks to the torrential showers unleashed by large, looming clouds in the last many days, sweat and shooting temperature don’t badger anymore. The fire spewing sun hides in obscurity. Instead, green vista, wet grass and mist greet the eyes on and the cool breeze caresses the senses.

In the whole cycle of seasons, it is this season of showers which perhaps inspires the psyche and fires the senses the most. In our epics and scriptures too, passages after colorful passages have been devoted to describe the beauty of brishti. It has inspired poets, playwrights and minstrels down the ages to wax lyrical in its praise.

And the Hindi films, which so sincerely and faithfully chronicle our life and times, have their own awesome bounty of barsaat songs. Since the advent of the medium, our film makers have paid rich tribute to the months of megh with the help of mesmerizing visuals and mellifluous music in film after film.

Talk of rain and pat comes to mind the title track of Raj Kapoor’s Barsaat set on Raag Bhairavi. An incorrigible optimist and a diehard dreamer that he was, the pangs of separation was only a passing phenomenon in his world view. Instead, love always won at the end and the lovers got united. So not surprisingly, Nature became benign and rain became a uniting factor in his films. And Lata sang Barsaat main humse mile tum sajan (Shailendra/Shankar-Jaikishan), one of her earliest numbers, oozing vintage innocence.

Perhaps this song foresaw Pyar Hua Ikrar Hua (Lata-Manna Dey/Sri 420). Beneath a sky pouring music on a rain swept pavement, an innocent tramp and his elegant lady love stand snuggled under an umbrella and sing the wet duet. And thus the awesome twosome of Raj-Nargis cut a perfect picture of amour and union.

Rain cascades like benediction in V Shantaram’s ‘Do Aankhen Barah Haat’. Here a jailor has set out to reform six hardened criminals. An onerous task no doubt. Led by him, the outlaws have just transformed a wasteland into an arable patch. In a way, this transformation reflects the reformed collective self of the criminals. And then, divine acknowledgement comes down in the form of rain. To celebrate their metamorphosis and the onset of monsoon, Vasant Desai composes a chorus Umad ghumad kar aayi re ghata (Manna Dey/Lata) for them.

Another all-time great rain song is Sawan ka mahina, pawan kare shor from‘Milan’ (Lata/Mukesh/Raag Pahadi). Here is this college going beauty (Nutan) requesting a boatman (Sunil Dutt) to teach her a song or two for her college function. And the boatman bursts into a shower of a song. The purveiya brings out the poet in him. Keeping his rustic milieu in mind, lyricist Anand Bakshi resorts to folk language and pastoral imagery. Try this line Jiarara jhoome aise, jaise banma naache mor. And Laxmikant-Pyarelal compliment the lines with a laidback tune and minimal orchestration.

One song that invariably wafts out of the radio during monsoon is Lata’s folkish number O sajna barkha bahar aayee (Parakh/Raag Khamaj). It is a song of love, longing and subtle sensuality, with lines like Mithi, mithi agni main jale mora jiara and gives evidence of lyricist Shailendra’s poetic excellence. Shalil Chaudhary’s tuning and orchestration in the song take it to greater heights. Along with the use of flute and sitar, the saxophone track laced to the antara is just unforgettable.

And who can forget the haunting Lata song Megha chaye aadhi raat (Sharmilee) based on Raag Patdeep. The song encompasses the hurt and humiliation that follow unrequited love and unfulfilled wishes. On a lonesome night, a demure Rakhee sings Hawa laage shool jaisi , tanaa maare chunaria and Naina bahe re Ganga mori , phir bhi man hai pyasa. It seems as if the elements too are taking a dig at the ditched damsel. Neeraj’s heart rending lines become a poignant composition under the baton of SD Burman.

As long as the post-independence patriotic euphoria was there and the dreams of a new India seemed achievable, Manoj Kumar’s characters celebrated monsoon, singing Purva suhani aayee re (Purab Aur Paschim). But with the advent of the 1970s came unemployment, poverty and labor unrest, to plague our society. And the patriot turned into a protestor. His films became his platform and his songs read like pamphlets. Rain ceased to make him a romantic then. Instead his rain songs poured like acid rain.

Ravindra Jain too has contributed a few soothing rain songs to enrich the Hindi film repertoire. One such song is Brishti pade tapur tupur from ‘Paheli’(Suresh Wadekar/Hemlata). Filmed on two frolicsome adolescents, this drizzling duet celebrates their innocent prank and paints an intimate picture of the season, complete with rain drops, rainbow and paper boats. One more equally enchanting song is the title-track of ‘Sawan Ko Aane Do’ sung by Jaspal Singh. Tujhe geeton main dhaloonga, Sawan ko aane do, he sings. A song dripping rustic charm and simplicity.

Two non-film rain songs, released a few years back, also left a lasting impression on the listeners. One is Adnan Sami’s Bheegi Bheegi Raaton Main, a soothing number that highlights the longing of a lonesome lover on a desolate rainy night. The other is the boisterous and frolicsome song—Ghata Saawan Ki by Shubha Mudgal.

But the two songs which can be undoubtedly called monsoon master pieces of modern times are Megha re megha re ( Suresh-Lata/Pyasa Sawan) and Rim jhim, run jhun,( Shanu-Kavita/1942-A Love Story) . The former song is by Santosh Anand/Laxmikant-Pyarelal and later one is by Javed Akhtar/RD Burman. Both are great compositions with beautiful lyrics and can hence be safely bracketed among the all time great rain songs of Hindi films.
………………………….

The author, a film maker, is an alumnus of FTII, Pune and is active in Film and Television sector for last twenty years. Presently he is based in Bhubaneswar, Odisha. He can be contacted at [email protected]