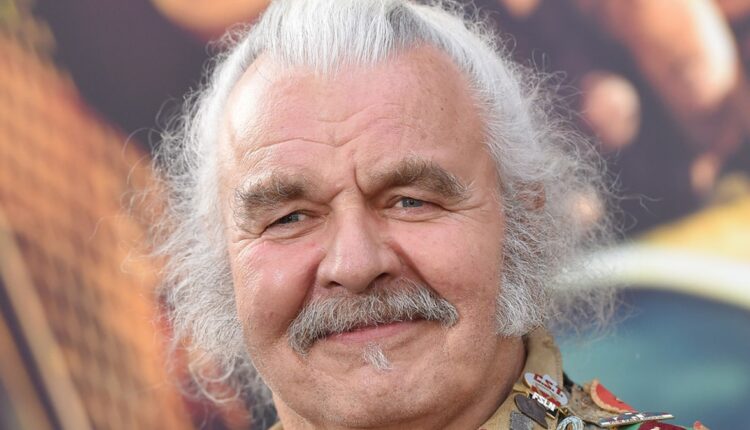 Brian Trenchard Smith, the British filmmaker who directed The Man From Hong Kong, confirmed the news on his social media accounts and informed his fans that Hugh died peacefully in a hospital. “Hugh Keays-Byrne, an unsung hero of Aussie cinema, has passed away at age 73. I’m continually floored that he played Toecutter, the central antagonist of 1979’s MAD MAX *and* Immortan Joe, the central antagonist 2015’s MAD MAX: FURY ROAD. Thanks for all the entertainment, sir”- he tweeted in his social media account.

Hugh was most famous for his iconic villains in Mad Max: Fury Road and Toecutter in the original Mad Max movie in the year 1979. He also appeared in the 1974 biker movie Stone and the 1986 drama. In the 60s and 70s, he was a popular star working in films like The Dragon Files.

He was born in India (Kashmir) to British parents in 1947and later moved to England when he was a child. After appearing in the original Mad Max, which George Miller directed, he was brought him back for Fury Road, where he played the antagonist Immortan Joe. 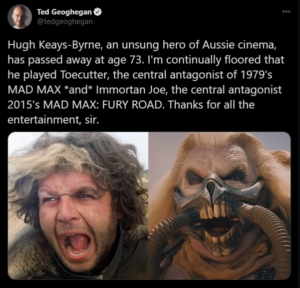 Brian Trenchard prayed tribute to Mad Max star- “Hugh had a generous heart, offering a helping hand to people in need, or a place to stay to a homeless teenager. He cared about social justice and preserving the environment long before these issues became fashionable”. “His life was governed by his sense of the oneness of humanity. We will miss his example and his friendship. Vale. Hugh.”