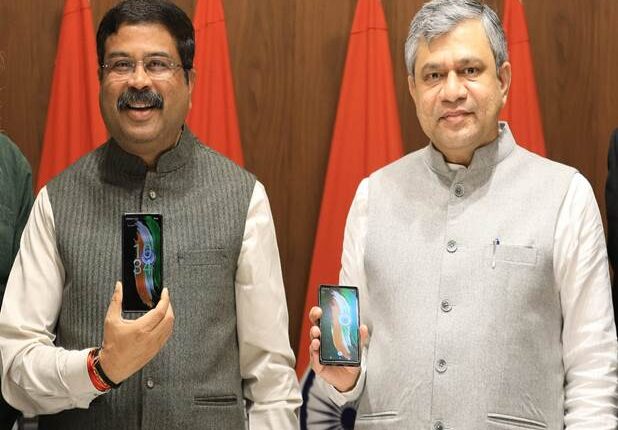 New Delhi: Union Education and Skill Development and Entrepreneurship Minister Dharmendra Pradhan along with Minister for Railways, Electronics and Information Technology, Ashwini Vaishnaw successfully tested the ‘BharOS’, a ‘Made in India’ mobile operating system developed by IIT Madras, on Tuesday.

Pradhan said that the poor people of the country will be the main beneficiaries of a strong, indigenous, dependable and self-reliant digital infrastructure. He further said that promoting policy enablers with the whole of the government approach is an applied experiment of Prime Minister Narendra Modi’s vision. ‘BharOS’ is a successful step towards data privacy, he added.

Pradhan further added that the successful test of ‘BharOS’ – the Made in India mobile operating system is an important initiative towards fulfilling PM Modi’s vision of a strong, indigenous & self-reliant digital infrastructure in India.

The software, called ‘Bharosa’, can be installed on commercial off-the-shelf handsets. It provides a safe environment for the user and is a significant contribution towards ‘Aatmanirbhar Bharat’.

Director of IIT Madras, Prof. V. Kamakoti said: “Bharosa Service is a mobile operating system built on the foundation of trust. It focuses on giving the user more freedom, control and flexibility to choose and use only the apps they want that best suit their needs. This innovative system promises to revolutionise the way users think about security and privacy on their mobile devices.

“IIT Madras aspires to work closely with many other private industry, government agencies, strategic agencies and telecom service providers to promote the use and adoption of Bharosa in our country,” he added.

BharOS has a ‘No Default Apps’ feature. This means users are not forced to use apps they may not be familiar with or trust. Additionally, this approach gives the user more freedom to have more control over the permissions that are available to apps on their device, as they can choose to grant permissions only to apps that they require in order to access certain features or data on their device.